I'm not sure where I left off so I'll just jump right in and tell you that Duncan and I have 3 rides under our belts now. Happy dance! He is still hesitant to move forward but he does it, and last night he actually gave me a little quicker walk, almost like what it should be. 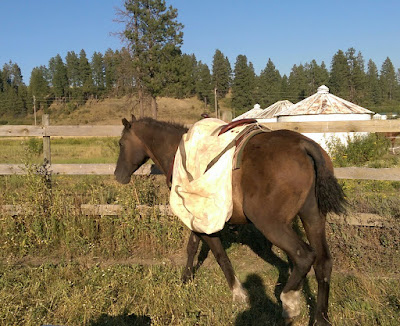 I started by asking him to walk and trot with tires in the pannier bags, since I was still worried about what he'd do when I asked him to move with me on his back. He did fine, so I decided to ride! He would do this funny crab-walk, mostly sideways, but it wasn't bad. John came into the round pen and gave him someone to follow, and he was much happier with that.

Ride #2 came several days later and honestly I don't remember it much. We just practiced moving forward, and he did improve. I took a bad picture in the dark but I deleted it.

The next time I worked with him we went on a big hike. He was so steady and unflappable! We had to walk a ways on the highway to get to the trailhead, with logging trucks zooming past. No biggie. Some motorcycles were very noisily getting going in the parking lot - no biggie. We saw a moose who turned out to have a calf with her. She's downhill of us and looking much smaller than she really is in the picture (right side): 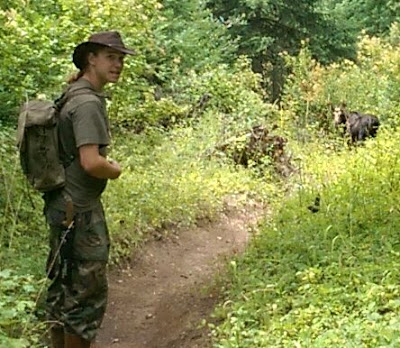 He crossed water and some bridges: 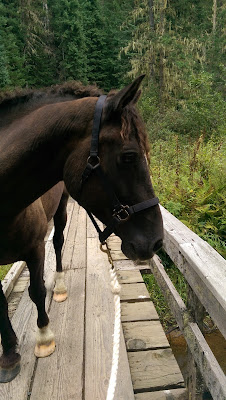 We met a couple people, who he thought should join us. He kept looking back for them after we'd passed them.  It was an excellent day.

Ride #3 was last night, and he did okay. Again there was a lot of time between rides. He seemed reserved and less cooperative. I wonder if his saddle fits as well as I think it does... I'm going to borrow a friend's saddle if it fits and see if that makes a difference. Scout's saddle definitely doesn't fit him. But it was probably just your typical third ride, where they're starting to get comfortable enough to let you know they're not totally loving this new game. 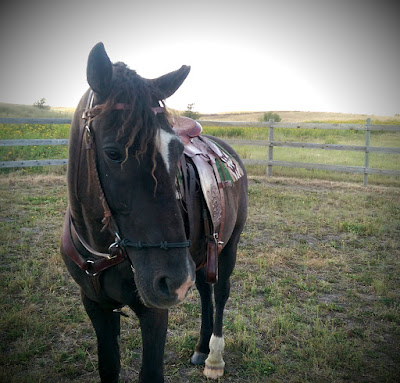 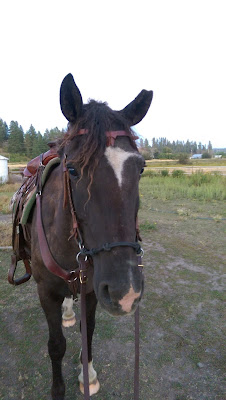 He did really well for the farrier the other day! He only tried to scoot away once. What a big brave boy.

Speaking of which, that was the same day I witnessed a rollover accident with a fully loaded horse trailer. I never want to see anything like that again. It was like a bad dream in slow motion. Amazingly, everyone walked away. All 4 horses were able to unfold themselves and unload, then load up again in another trailer. I think it was a good thing they were packed in tight with no dividers. I think they probably hurt a lot worse a little bit later. I hope they can continue to do their jobs. It was a ranching family, and to lose a truck and trailer and the use of 4 horses would be a hard hit. I hope their daughter is able to pull a trailer again without panicking.  I just wish it hadn't happened. But I'm glad they didn't hit me. It was a little close.

Oh, and that same day my dogs tried to kill each other again (and we almost got hit by a tow truck going to the vet- I swear none of these near misses are my fault). The dogs are starting to heal but I wasn't sure they would. Having 2 dogs in cones who have to be totally separate from each other is very hard in this tiny house. I might try Prozac for Blue. I can't face the thought of having to put him down, but this is clearly not a good situation. I think I'll order some basket muzzles and consult a trainer too.

Today I'm going to saddle Duncan and not ride, then go borrow a saddle, then do mundane stuff, and ride in the evening. It's too hot to do anything during the day.


Posted by Andrea -Mustang Saga at 7:21 AM 3 comments: Links to this post