The trainer reports Duncan is fine. Whatever had him down when I was there must have passed.

Also, Scout seems fine. I've worked him 2 days in a row and he's been willing and able. So I'm glad I didn't have time to take him to the vet right away.

I actually really enjoyed riding Scout last night. It's still like driving a barge but he does try. :)
Posted by Andrea -Mustang Saga at 8:31 AM 1 comment: Links to this post

Update, good and not so good

Duncan is doing well at the trainer. He's got a few rides on him now and I'm glad I wasn't the one to do the riding.  On his first ride he did spook himself and break into a pretty good run a couple times, but the trainer is equipped to help him through that without a lot of drama. There's a video on facebook but I don't know how to share it here.

He did better yesterday. More relaxed. They just did more of the same, asking him to maintain gait and stay on the rail. He didn't do anything silly. I took a couple pictures. 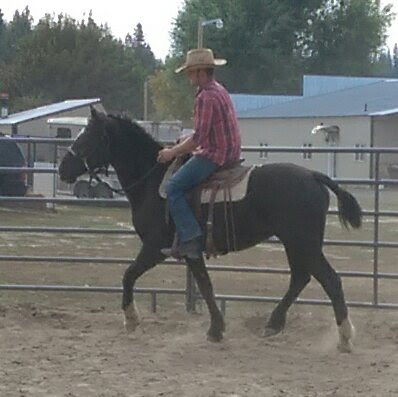 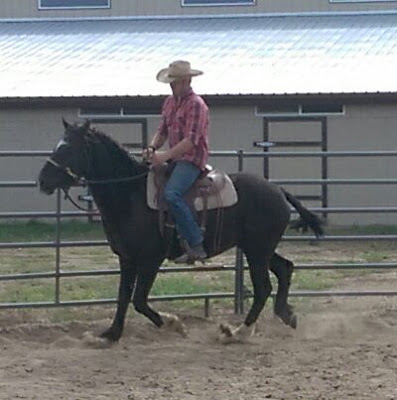 Afterward we went for a little hike in the woods. We had to walk through the setup for the Spokane Renaissance Faire to get to the forest. So of course I took a picture. 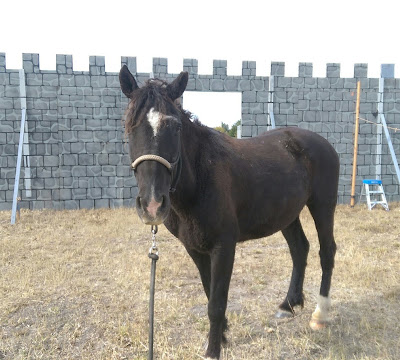 I'm worried he's getting sick. Goopy eyes, snotty nose, and yesterday he seemed a little lethargic. It could just be the sandy dust up there, and maybe I just caught him at nap time, but I don't think so. They're going to keep a close eye on him.

In more bad news, I think John and I are cursed to never have two rideable horses at once. Scout is not quite right. I hesitate to call him lame because he's not limping, but he doesn't ride well. He's cranky, which is totally not like him, and he has some obvious pain at times. The chiropractor has failed to fix it after 2 visits so I think it's time for the vet. And of course I don't have time for that for over a week, but it's not like he hasn't lived with it for a while now.

To end on a better note, the dogs are mostly getting along. :)
Posted by Andrea -Mustang Saga at 6:33 AM 2 comments: Links to this post

After our 5th ride I decided that Duncan has to go to the trainer. He didn't do anything bad, he just made me nervous with his reluctance to move, and my nerves made him nervous, so I figured I'd better find someone to do it right.

I took him up yesterday. It was weird just leaving him behind. :( I'll go see him as often as I can.

Scout has seen the chiropractor twice now, and barely been ridden in the last month or more. So his naughtiness on our recent ride is to be expected, but he bucked! He's never done that! I think it was just excess energy, feeling too good, and maybe a little nerves. There were wolves in the area. They'd been harassing a hunter at the trailhead every night, and their tracks were all over the place. That doesn't excuse his behavior, but I'll give him some leeway since I haven't been riding enough. It was just a little gentle buck and I pulled him around and he quit.

I just reintroduced the dogs to each other yesterday. I think Blue's Prozac is working, but Huckleberry is being a growly jerk. He got in big trouble for it last night. Blue is definitely knocked down a peg though. We'll see how it goes. We won't leave them unsupervised or let them outside to run together.

Whoops, I'm gonna be late, gotta go!
Posted by Andrea -Mustang Saga at 6:38 AM 3 comments: Links to this post