Got My Mojo Back


I saddled up Scout in the new Fabtron lightweight saddle and we had fun like kids, just goofing around. I didn't want to quit. And none of it gave me a headache.

The farrier came today and he'd had a cancellation so he had extra time and I decided what the heck, I want shoes put on. It'll allow me to ride out from home or wherever the heck I want without worrying about gravel or rocks. And it will make me ride more. I can't wrestle with boots, and to be honest, they were always too much of a pain.

In all my years I'd never seen a farrier prepare shoes. My only horse I've ever had shod was Scout, once, and that was by the trainer when I wasn't there. 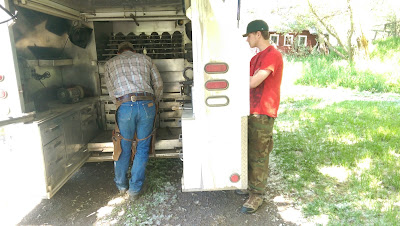 It was super cool! Since Liam is into working with metal he came out and watched closely and asked questions. Boy did my farrier light up and really show his passion for what he does. He said he'd take Liam on as an apprentice if he decides it's something he wants to do. !!! That would be amazing. I'm going to get a book to get him started and see if he wants to learn a little bit of the horsemanship part of it.
Scout was a good boy. Slightly wiggly and a little wide-eyed about the noises coming from the trailer, but overall really very well behaved.

Oh, and John saw a bear today crossing the highway near one of my favorite trails. Too cool! 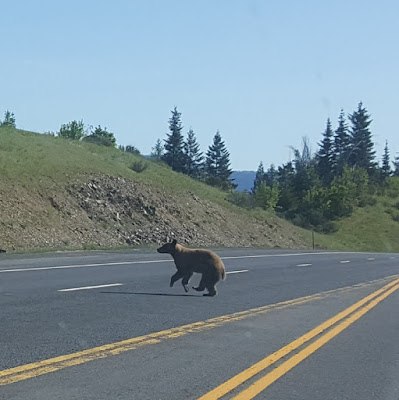 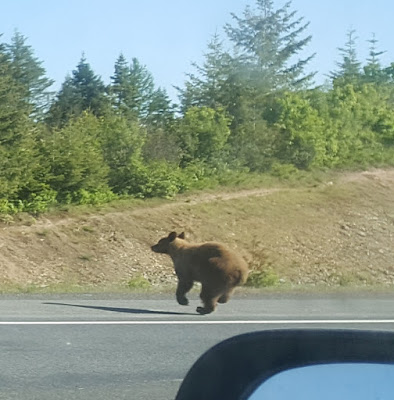 
Posted by Andrea -Mustang Saga at 8:51 PM 2 comments: Links to this post

It just showed up in the middle of the floor here at home. Yay!

Also, I sold the Crates saddle and bought a cheap, lighter weight Fabtron saddle. I like it. It seems to fit Scout pretty well but it's a little wide for Duncan. It doesn't seem to bother my neck as much. Maybe I'll ride in it soon.

And in case you forgot, Juniper is very cute. 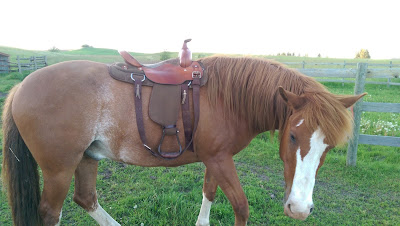 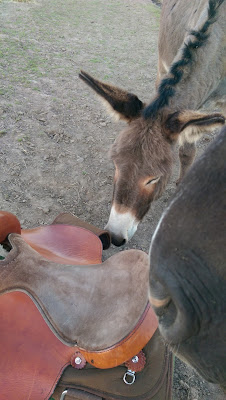 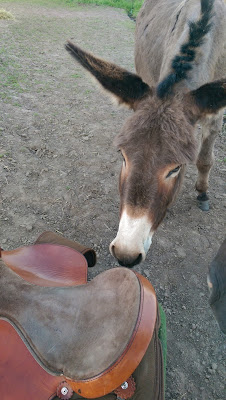 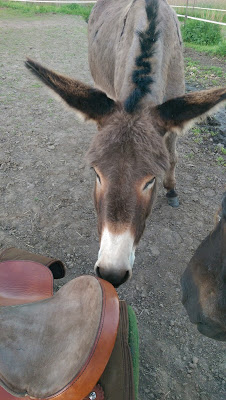 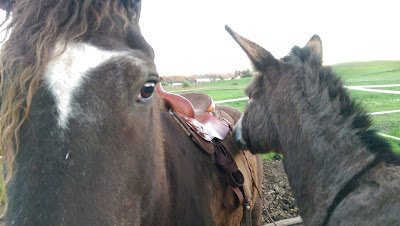 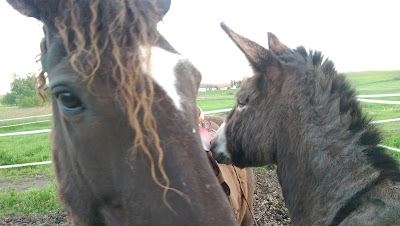 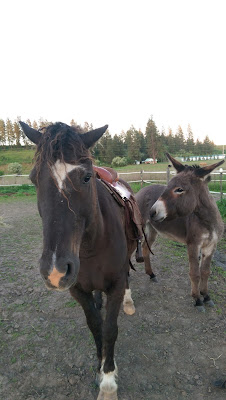 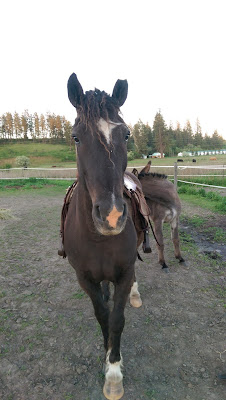 Posted by Andrea -Mustang Saga at 6:37 AM 3 comments: Links to this post

I lost my Tonka ring. 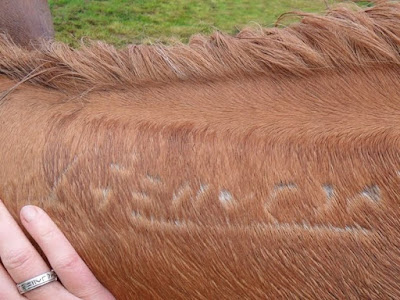 Pretty sure it fell out of my pack at a trailhead when I took my keys out of the pocket they shared in my pack. The pocket I very carefully never open during a hike because I don't want to lose anything in it. Damn my hands that swell so badly when I'm hiking!

I looked for it for a long time the next day, even used a metal detector. Found a lot of bullet casings. No ring. Someone must have picked it up, unless it rolled a distance off the road when it dropped. I put out an APB on Facebook. I could order a new one but I'd rather have the original back.

Posted by Andrea -Mustang Saga at 6:12 AM 2 comments: Links to this post

My niece is getting married today! I'm waiting out a headache with plenty of drugs on board and thinking about boots.

I ordered the same boots I've been wearing these last 10 years because they started making them again hooray! The new ones fit even better. I had to lay them next to each other and take a picture, thinking the new boots would put the old boots to shame.

But I was wrong. 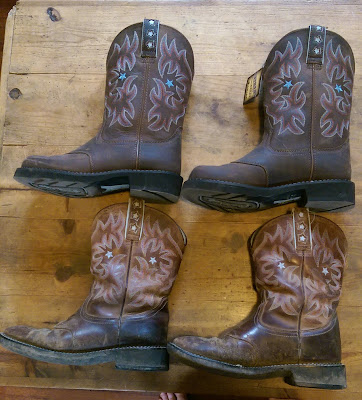 The new boots have no soul yet.

I've walked and ridden so many miles and memories in these boots. The time narcoleptic Danni broke down the camp fence and all the horses took off into the darkness and I almost couldn't get those new, stiff, cold damn boots on to go chasing after them.  The first time Tonka dumped me and my boot almost hung up in the stirrup before it popped off and I cried on the way home from the trainer's, wondering what I'd gotten myself into with that horse. Blue ribbons at Mustang Days. Many, many miles in the mountains. Mostly with my Tonka.

These new boots will slip on and off easier, so I won't get hung up in the stirrup. I'll break them in and there will be more memories made. I wonder what they'll be?

Posted by Andrea -Mustang Saga at 9:40 AM No comments: Links to this post

Late evening is my favorite time to spend with the horses. Some days, even when the world has been drowned with rain all day, the evening is dry and the sky puts on a show for us. 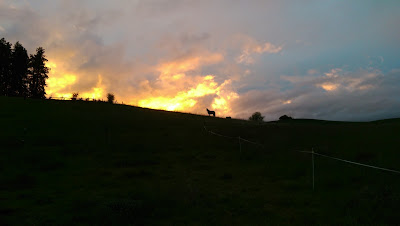 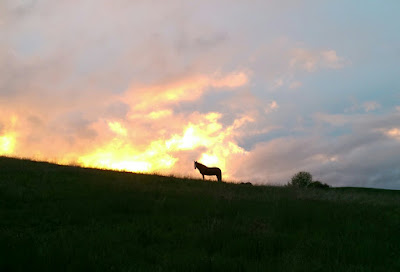 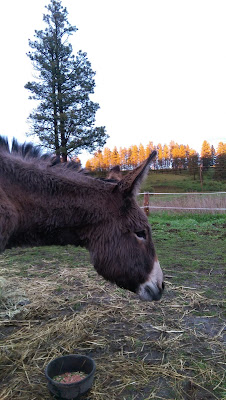 We went on a pretty fun hike the other day and found a trail connection I didn't know about. Actually maybe it was just a game trail. But it worked. Winston and Blue posed nicely for a picture at a snack break. 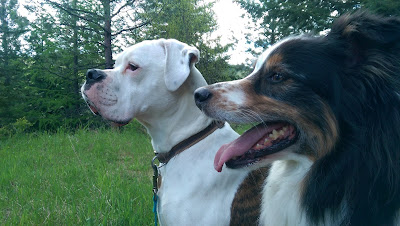 Huckleberry is a free agent and does not pose for pictures. He's getting old. He still jumps over logs but he shouldn't. He hurts himself a little. He has a bad back, poor guy. 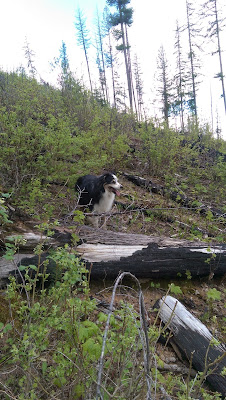 Have you ever felt the fresh new needles of a tamarack (larch) tree? If you haven't, you should. So deliciously soft. 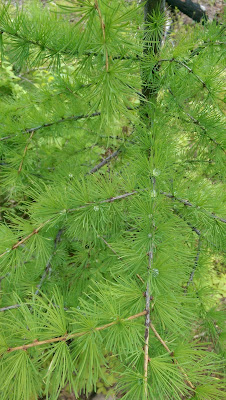 I have a new friend at work. He's a smelly cat. He is so tenderly sweet. He pats gently with his paws and gives kisses. Eww, I know. I am so not a cat person, but this one is special. I'd bring him home if I could but I don't think the dogs would allow it. 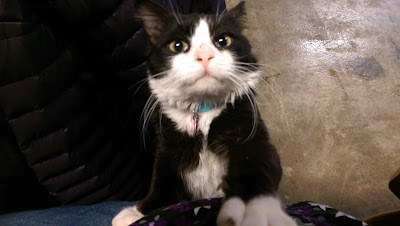 My father in law is in the cardiac intensive care unit and hooked up to so much stuff you wouldn't believe it. He doesn't want visitors until some of the tubes come out and he's able to talk. I'm not sure when that will be. They expect him to be in the hospital for 2-3 weeks. I worry. But now that he's conscious I feel a little better about it. He has congestive heart failure and fluid built up too much.

My niece is getting married in 2 days! I need to get off my bum and get to work. Last minute things to do.
Posted by Andrea -Mustang Saga at 10:09 AM 2 comments: Links to this post 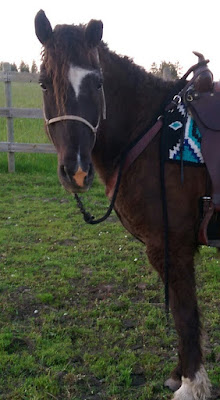 The grass is growing but the lawn mower is broken.

These guys don't mind helping out though. 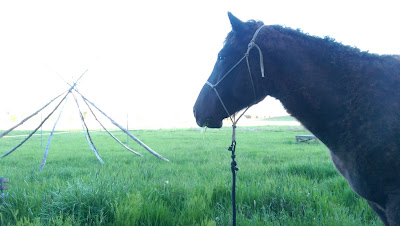 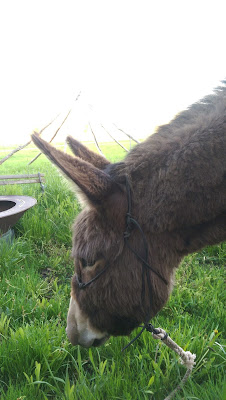 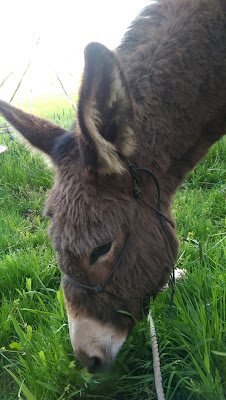 What do you suppose this is? It reminds me of a lump I found on Bella's butt cheek years ago that never got worse, but hers was just black and didn't have a flat white patch next to it. Maybe a sarcoid? 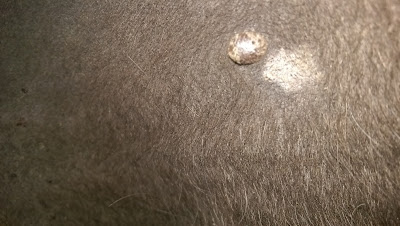 Posted by Andrea -Mustang Saga at 6:20 AM 2 comments: Links to this post 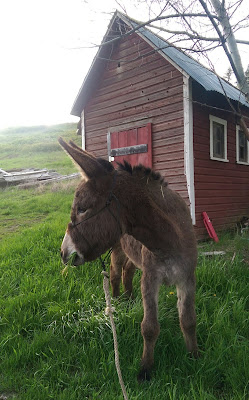 After Juniper got loose, she got loose again and my son tried to catch her and it didn't go well. She has a stranger danger issue we obviously need to work on, but his attempt to catch her instead of calling me set us way back and she decided she was a feral donkey and halters were dumb. It was taking me an hour to catch her every night in a kinda medium corral. I vaccinated her and that helped cement her idea that the whole human/halter thing is no bueno.

I finally decided to put her in a tiny gentling pen and start from scratch. Worse off than we'd ever been, she acted like everything was scary, but she was also being a brat.

We started making progress when I decided to quit trying to be friendly and start giving her some structure - asking her to move until she offered to face up and stand to be haltered. She figured that out fast.

Then I left for 5 days to take care of my mom after her shoulder surgery (she's doing great) and came back to a lonely beastie who was more willing to cooperate. 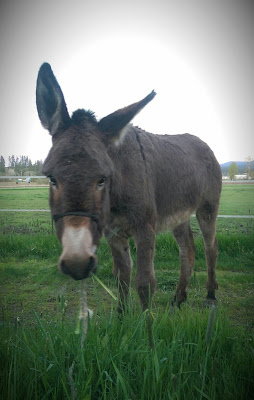 Now she's my buddy again, in the bigger area but not out to pasture with Duncan yet. I've got to re-introduce her to grass slowly and I think it's helpful to have her needing a friend right now.

I think I saw the baby moving tonight. Not 100% sure because she's pretty wiggly herself, but I think it was baby. Pretty cool.

Duncan thinks I'm awesome because he's itchy and shedding. I think he'd follow me inside if he could. He doesn't fit in with the mustang even though they're pastured together and they get along okay. He'd rather be part of my herd, poor fella. I might camp out with him some night. I think it'd be fun.

In other news: my head hurts, my boss is a stress case and that trickles down big time, we're short handed at work for a couple months, my kid got punched in the face at school today, and did I mention my head hurts? I can't afford the treatment they recommend. :/  I can't really think of anything to get excited about lately... The days just come and go.
Posted by Andrea -Mustang Saga at 9:50 PM 6 comments: Links to this post