I love sunshine! My head hurts a little less and I have so much more energy. Life has new meaning.

I went hiking after work with one of my co-workers at one of the places where I often ride, and look what we ran into. In this first picture, the dark dot near the road shows how close she was, and she never moved as we walked by. 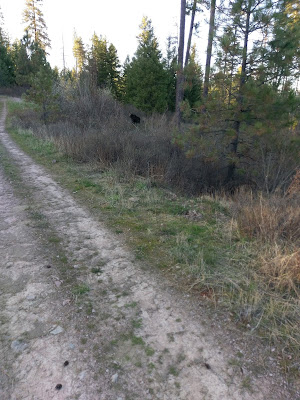 This is totally without zoom. I've never had a moose behave like this! Of course I was watching for any sign of agitation or aggression but she just watched us go by. I didn't see a baby and she didn't seem focused on a particular area, but of course she wouldn't want to give away baby's location. 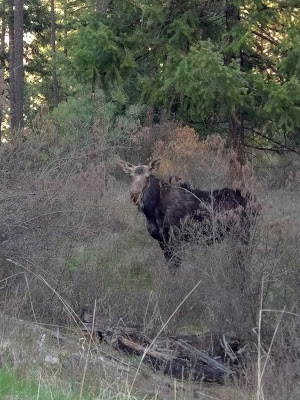 Yesterday I heard that the wildlife are very stressed by the late spring and "they" (whoever they are) are asking antler shed hunters to stay out of the forests because there are so many starved moose and elk.  Maybe our moose friend was just hungry and tired. :(

The flowers are blooming! Someone with a real camera and some photography skills needs to go out there and take some pictures. It's a very short hike. I'll volunteer to be the tour guide. 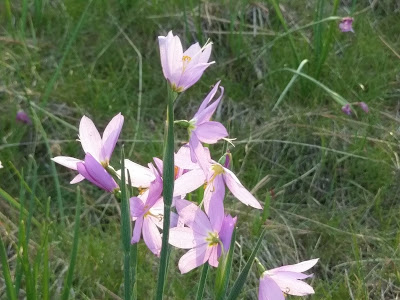 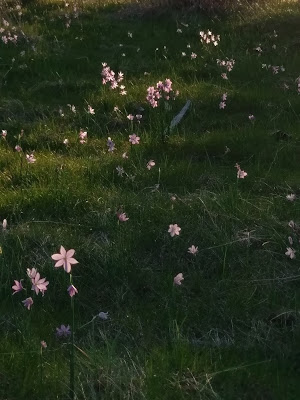 Somewhere up here we saw some elk, but the were moving too fast for pictures. We also saw tons of deer. It's really amazing how much wildlife is in this little pocket of state land in the middle of a settled area.

Seriously, someone needs to take better pictures of this. The purple flowers are so enchanting. 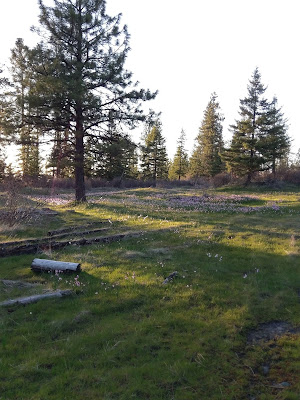 Yesterday Sawyer and I had a nice ride and I almost forgot to take pictures! I can't wait to get out on the trail but I didn't have time. 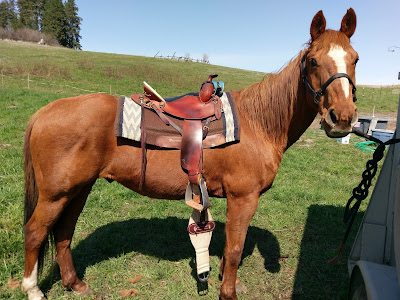 My sister is feeling well enough that we got to go fishing yesterday. She caught her limit and do did my niece. I was one short of my limit, but I caught a couple of pretty good sized ones. My parents did pretty well too. John and Liam didn't get to go, they were tearing shingles off a roof. Not near as much fun.

Scout and I had a nice ride in the evening. He was very forward and more sensitive to cues than usual. We did a beautiful gate closure that was so smooth we were like one unit! We don't practice that often so I was shocked. Later we tried again and he didn't want to focus. We really need to work on focus. It's like an episode of Short Attention Span Theater (both of us).

Today is Scout's rescheduled chiropractor appointment. Maybe I'll have something of interest to report about that later.
Posted by Andrea -Mustang Saga at 8:05 AM 1 comment: Links to this post

What a novel experience, I got to be a spectator!  I even took pictures!

Sawyer's teeth had improved. The minor mobility in some of his teeth is better, and the food getting trapped in the gaps isn't staying there long enough to irritate the gums. So he can be on a once yearly maintenance schedule. We have to check often because his incisors are so short they allow his molars to grind together pretty hard. With those little gaps and slightly mobile teeth, things can go wrong fast even though at his age just teeth are erupting slowly. 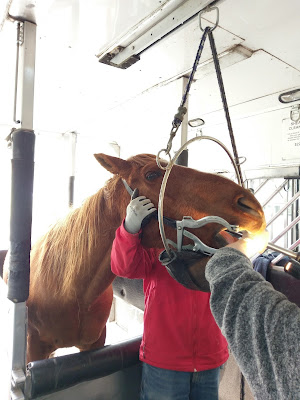 Scout really should have been on a once yearly maintenance schedule at his age. I knew that but was trying to be cheap. He had razor sharp points and torn up cheeks. Nothing more serious than that though. When I got him home he was awake enough to eat, and he went at it with a new purpose like he was so happy to have a comfortable mouth again. 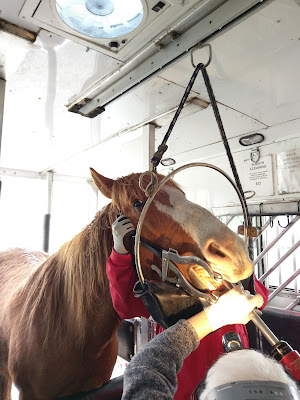 And just for fun this is Huckleberry after I told him Grandma was coming. Impatiently waiting. He loves his grandma. :) 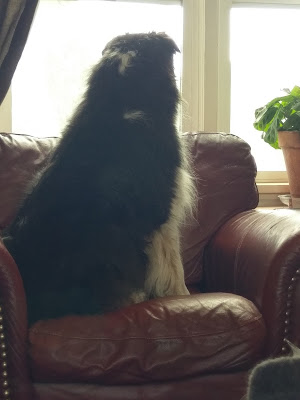 I really want to be able to play with my horses, but things have been... hard might be the right word for it. Terrible, but for my friend, not as much for me. On Monday almost two weeks ago, I got a call from my boss at 11:00 at night that my co-worker's husband didn't come home from fishing. They had found his boat overturned and divers were looking for his body. I lay there for hours trying to think how this could not be final. Could he be in the woods, trying to stay warm? But no, it was just too, too cold. I can't even tell you how attached those two were. They talked on the phone several times throughout the work day every day, and she giggled like a school girl every time she talked to him (she's in her 50's). She is so devastated. He was her whole world. I love her and I'm worried for her. She comes back to work next week, because what else does she do? We won't expect her to hold it together. We just don't want her to be alone.

Besides the sadness, that means I've been exhausted after work, working through headaches, and not doing much more than feeding the horses.

I did take the boys for their 6 month health certificates. We drew blood to test Scout's selenium and trace mineral levels. I am having a hell of a time getting results from the lab. Grrr. He does not have PSSM.

Next both Scout and Sawyer to to the dentist tomorrow, and Scout is going to the chiropractor on Monday. Both are also vets.  Then I wash my hands of it. Scout will have to just be fine. He is dropping quids (wads of chewed up hay), I realized after I put him in with Sawyer. Bella would have eaten them before. So even though I take (what I consider to be) good care of his teeth, maybe we have a dental problem. It's been 2 years since he saw the dentist. Maybe his mom kicked him in the mouth.

The ducks are freaking adorable still, but they stink.  I've got to get them moved outside.  I've taken them out a few times and they love it, but they get scared when I leave them alone. 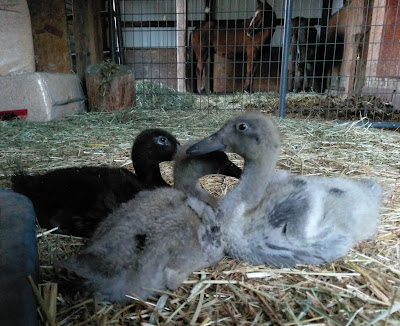 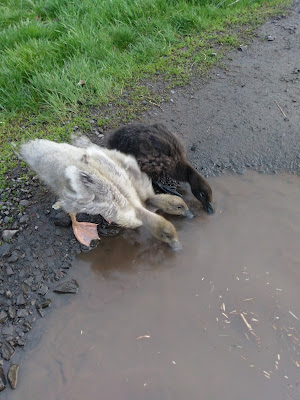 Scout says hello with his smaller eye, evidence that yes, his mama would kick him in the face. She doesn't mean anything by it, she just has fits of big excitement. 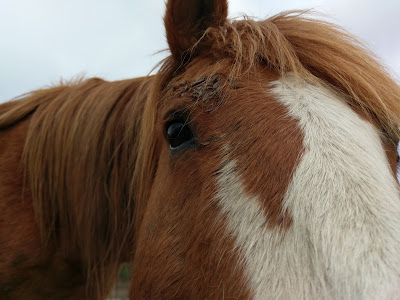 Y'all have a great weekend! I better get moving. Too much to do!
Posted by Andrea -Mustang Saga at 7:33 AM 1 comment: Links to this post

I ran Scout's blood again and this time it was completely normal. Turns out it was a problem with the centrifuge that caused the bad results (it broke a lot of red blood cells and left them in the serum when it spun down the blood too slowly).

I still wonder why he is so thin (for him),  lacking muscle and exercise intolerant, but maybe he's just coming out of winter differently this year. I may send in a selenium and trace mineral test but I supplement for that stuff so I don't see why that would be the problem. I might just put him on the hill so he has to get some exercise on his own, continue to give more protein, and start riding more. Of course, the PSSM test will still be run, which I think is a good thing.

We also drew blood for Coggins and 6 month health certificates, so we'll be good to cross state lines. We have a fun camping trip planned at the end of the month. I can't wait!

The babies at getting to be more and more fun. They run around the house like a herd of elephants when I let them loose. I love them! They are poop machines though. We have gone through so many baby wipes and a lot of laundry. And I lost a nose ring. Sybil stole my nose ring at least 3 times, and the 3rd time it was gone. I don't think she could eat it, thank goodness, but I need to be a little quicker. 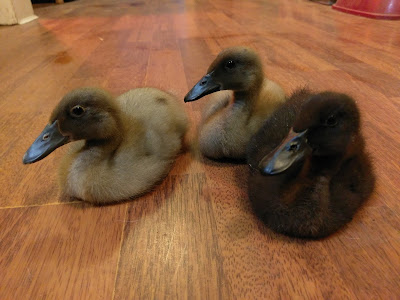