As usual, all that worry was a waste of time and energy. The neurologist said it's just post concussive syndrome. From what my doctor had said and how the symptoms matched, I was thinking it might be chiari malformation, which would be more serious. Consulting Doctor Google is often not a good idea. :)

Anyway. I'm in the middle of another days-long headache, so I don't really have much more to say.

Oh, Happy New Year! Here's hoping for a better year this time.
Posted by Andrea -Mustang Saga at 8:19 AM 1 comment: Links to this post

So maybe it isn't my neck after all. My MRI results came back and my doctor saw a couple things that weren't right. One, my brain position is wrong low in the back of my skull.  "Like a herniation, but it's not a herniation." The other thing he didn't say. I have to wait to see a neurologist to make sense of it.

I love my doctor, and I think he was trying not to worry me or give me a false diagnosis, but I'm worried. What is it? What will it mean for my future? Will I be able to ride? Will I be able to continue to do my job or will I have to look for something more sedentary? I should just go with the flow and know that it will all turn out OK. Staying up all night worrying and thinking about selling horses, maybe selling the farm, etc... isn't going to help, anyway.

My parents have a friend who is a really good neurologist and he's going to take a peek. Maybe it's nothing. Or maybe it's treatable. Cross your fingers for me.

Also, there is a lot of snow. It just keeps coming. We've gotten another foot or so since these pics were taken. 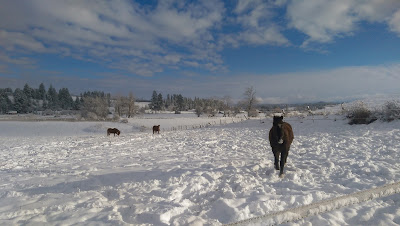 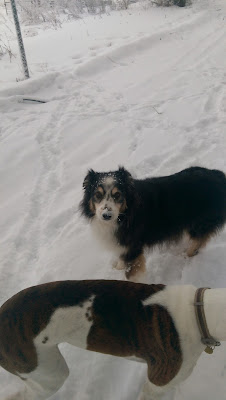 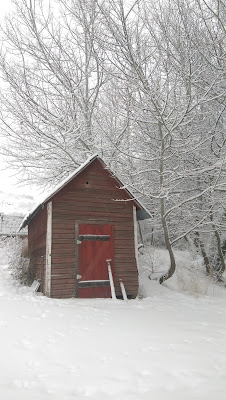 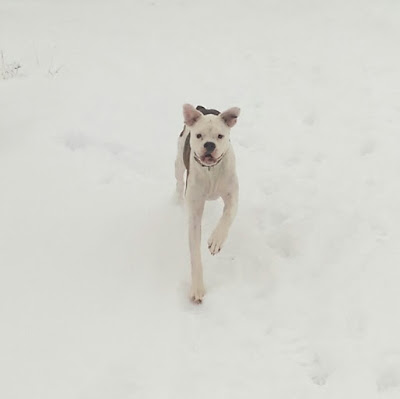 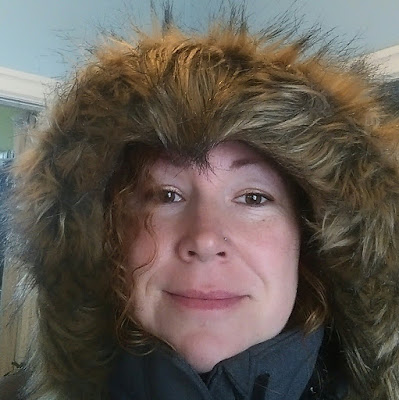 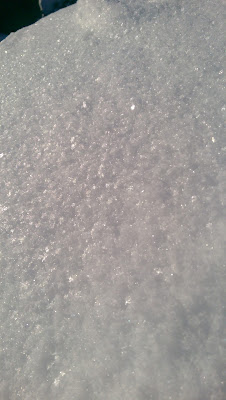 Posted by Andrea -Mustang Saga at 6:07 AM 2 comments: Links to this post

The snow just won't go away. We had a pretty cold spell and now it's hanging right around freezing, thawing some, but just enough to tease me.

Juniper has been signed over to the person who rescued her, who would be more than happy to sign her over to me if only I could go pick her up. I try not to think too much about it or it would drive me nuts.

I've got 2 weeks off from one job, just working a couple days a week at the other job. I've had so many doctor's appointments lately it hasn't felt like a vacation. And my neck is getting worse, not better (my own fault, I got impatient and tried to do some extra exercise). I'm hoping my insurance will approve some more imaging before the end of the year.

Oh! I do have one picture to share. I just happened to notice that it looks like the spirit of Gumby was hanging out with us on Kamiak Butte one day. Check out this shadow: 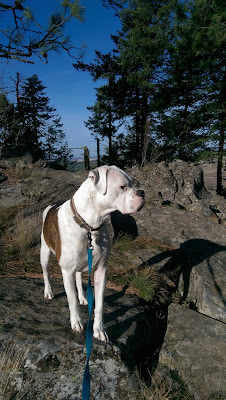 That's about all I've got. Hope you all have a Merry Christmas! Happy Holidays! Super Solstice! Joy in whatever you do!
(The days age getting longer now!) 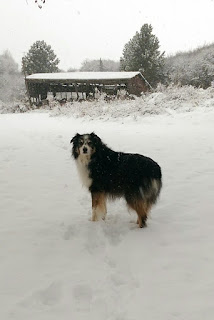 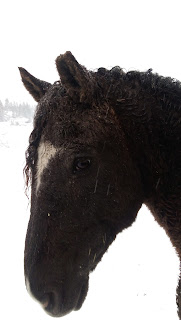 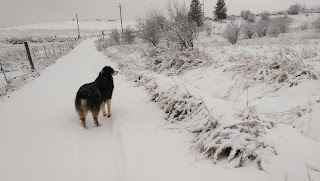 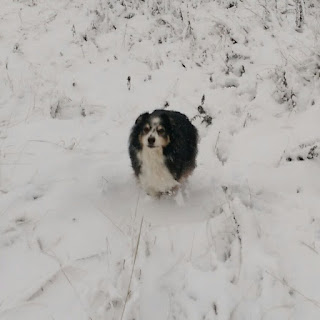 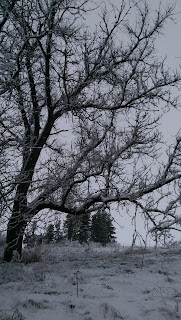 Posted by Andrea -Mustang Saga at 5:43 AM 2 comments: Links to this post

We've had some snow, and have up to 13 inches more coming over the next several days. So I may not be able to pick Juniper up for quite a long time. The steepest part of my driveway is shaded, so it takes a looooong time for snow and ice to melt.

On the brighter side, the owner has supposedly mailed a bill of sale to the lady who rescued her. So I could go get her soon, if only the weather had stayed clear.
Posted by Andrea -Mustang Saga at 5:56 AM No comments: Links to this post

Donkeys are so smart

As I suspected, she didn't sign over the donkeys. Apparently she has no interest in keeping mine though, so we should be good to go eventually. She is very confused, thinking grass hay is alfalfa, claiming she had hooves trimmed that were done after they were moved. She wasn't able to tell them apart and even thought that some of the other donkeys there belonged to her. She complained that the donkeys are being overfed and are too fat. They are not: 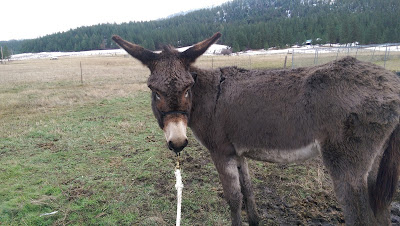 As you can probably gather from the above picture, Juniper wasn't super happy about halter training at first.

She caught on really quickly though. She even yielded her fore and hindquarters a couple times. Unlike her spoiled herd mates who were mobbing us and almost impossible to move. 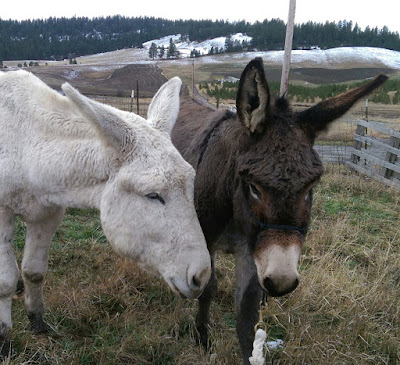 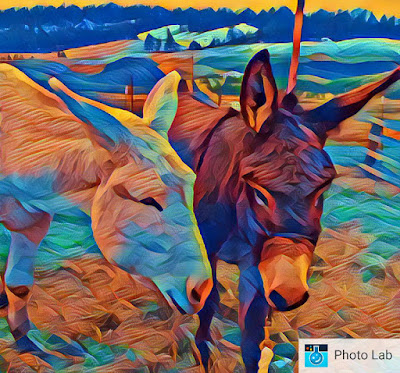 I took the halter off and rubbed her a lot, and I can't remember exactly what she did, but she let me know she wanted me to put it back on and play some more. So we did. She just loved the attention. When I took it off and walked around she stayed with me and mildly tried to boss me around a bit, telling me to stay put and rub her. I didn't let her tell me where to go but she did get lots more love. 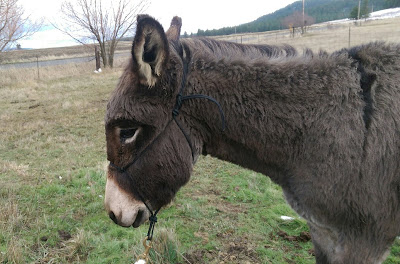 I got a closer look at her teeth and she is a two year old. I'm no expert on donkey growth but I doubt she'll grow much more. That's OK. I already love her. I'll train her to pack and pull a cart if we can't ride.

Also, in regards to teeth, her premolars are a mess! I know she's at the age for the caps to be shedding and her permanent teeth to be coming in, so it's normal, but I wonder if it's making eating difficult.

She loves ginger snaps. (Scout and Duncan think they're poison though). 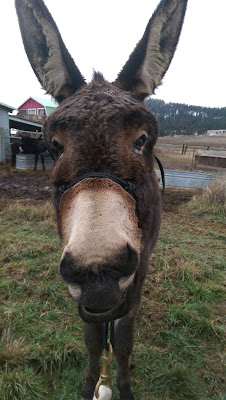 She likes to sniff noses and considers being naughty and nibbling my nose. 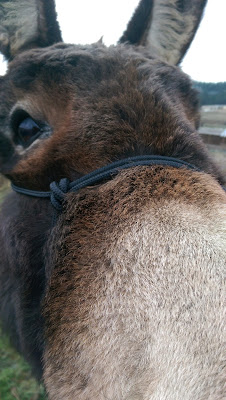 She has such a lovely snoot. 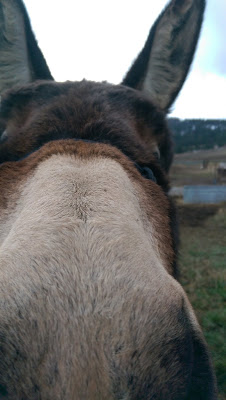 I may have ownership by Wednesday. I hope so. And I hope the roads are free of snow & ice so I can go get her.


Posted by Andrea -Mustang Saga at 8:40 AM 2 comments: Links to this post

I may be able to pick up Juniper this weekend! I've stopped visiting her in case this whole thing falls apart. I didn't want to become too attached. Supposedly the neglectful owner is going to sign over ownership tomorrow, but she's showing up in person and I'm afraid she'll change her mind.

A quick pic of another Kamiak hike: 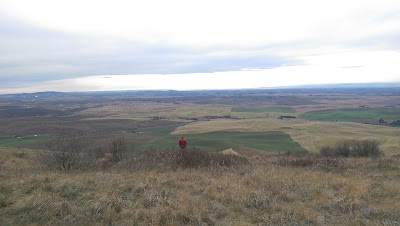 And I've signed on for a second job temporarily. The vet clinic I used to work at has soooo much turnover. For a reason. But I'm just covering 2 days a week for a month to 6 weeks while someone has a baby. Not sure exactly when that will start.

Posted by Andrea -Mustang Saga at 6:14 AM No comments: Links to this post