Busy busy! I'm just stopping by to say hello. We're getting in the last of our hay today. I hope it's the last. Hay days are hard. I want to go to the forest and relax! 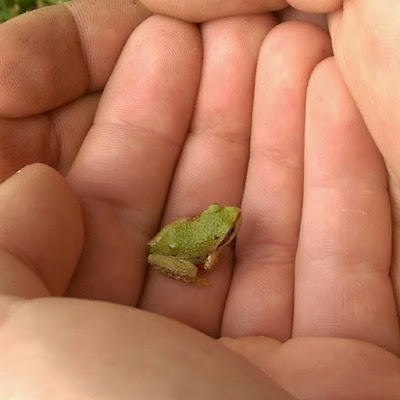 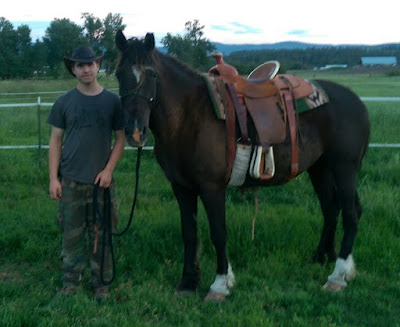 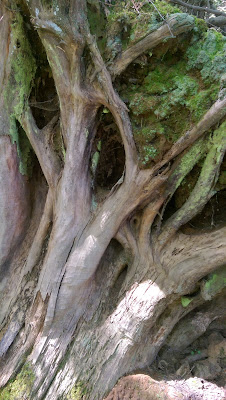 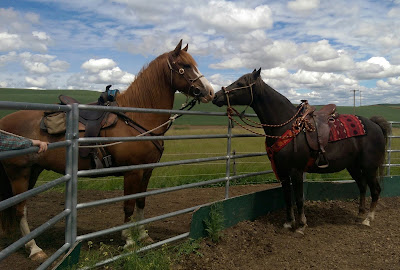 Hike and Ride at Ruby Creek

I really feel so grateful to live in such beautiful country. We went out to a place I've been lots of times, but Liam spotted a little cow path off to the side and said, "Let's go this way," and a whole new world opened up. It was super fun and really pretty. We'll have to explore it more later. All of the trails and logging roads meet up, and you could really be out there for weeks if you wanted to. (I'd love to) 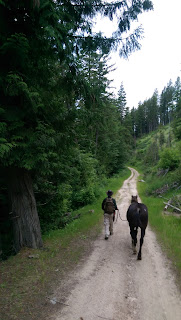 Liam is really loving spending time with Duncan. I need to take some time to do some real training with them. Liam really has very little foundation in horsemanship, but he learns fast and he does well. Duncan likes him a lot too, and seems pretty relaxed. They're both green but they have plenty of time on their hands. Just need to find a mentor.
Posted by Andrea -Mustang Saga at 6:22 AM 1 comment: Links to this post

I had a call tonight the a former co-worker died in a car accident on her way to college in another state. We didn't hang out together, I didn't see her often after she got a job with more hours, but I loved it when she dropped by to see us. I would have adopted her as my own. She was only 18, just graduated from high school. Full of life, sarcastic as all get-out, so much fun. A real go-getter. We had a lot of fun working together. She had so much struggle behind her and so much good ahead of her. I can't believe all that was to come just isn't going to be. I don't know how her parents will go on. She was too young and too bright and wonderful to just be gone.

I am honored to have known her lovely spirit. She conquered her obstacles and brightened the world. I'm sad now but I will remember her exuberance and her smart ass smile forever.
Posted by Andrea -Mustang Saga at 10:04 PM 2 comments: Links to this post

We took the fam for a walk 'n ride over the weekend. Liam hiked with Duncan. It was fun. 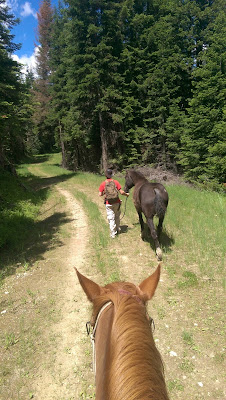 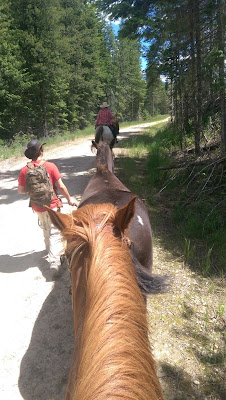 Yesterday I found a halter on clearance for five dollars. I thought it would be a pretty color on miss Juniper. 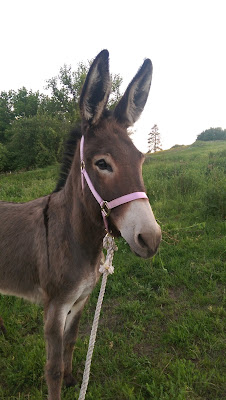 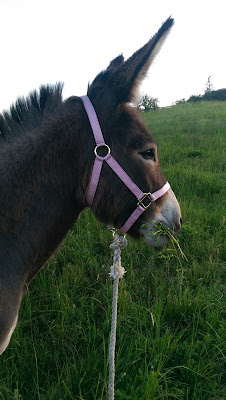 Liam is really falling in love with Duncan. They spend a lot of time together. I might have to get them both some training together. 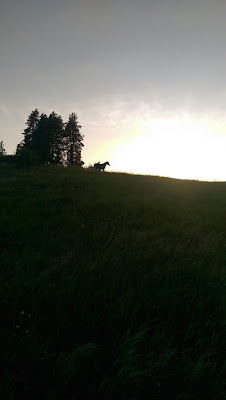 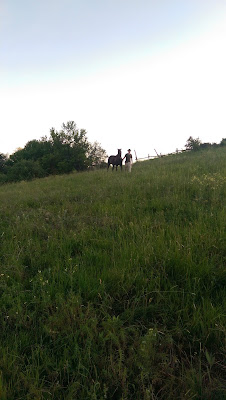 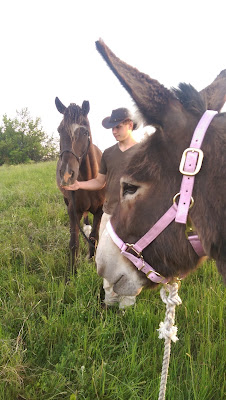 Posted by Andrea -Mustang Saga at 6:16 AM No comments: Links to this post

The Celtic Moon of the Horses 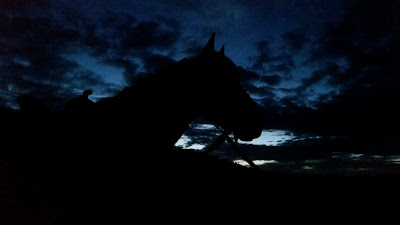 According to facebook, the full moon last night was "The Celtic Moon of the Horses."  Who knows, maybe someone just made that up, but my sister and I made the most of it.

It must have been after 6 by the time I got home from work, found my horse, and got to the trailhead and got saddled. Scout had a little nervous energy. 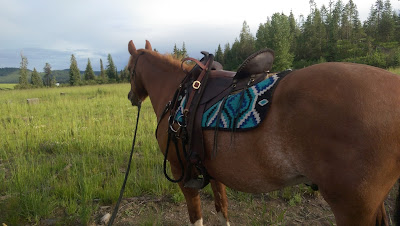 This was an accidental picture that I really like. 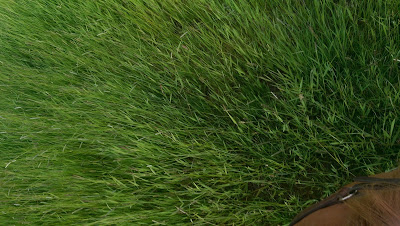 The grass eating was a bit much, but who can blame them when it's practically in their mouths anyway? We headed for the forest. 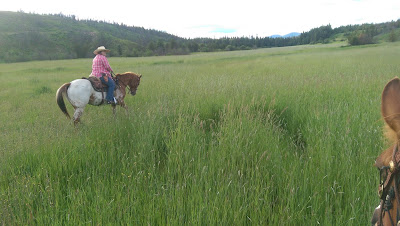 Into the deep dark. We saw lots of animal sign. It's amazing what you see out there, not too far from houses and people, but far enough. I love it. I wish we had seen themselves.

Scout was a trooper, marching on. 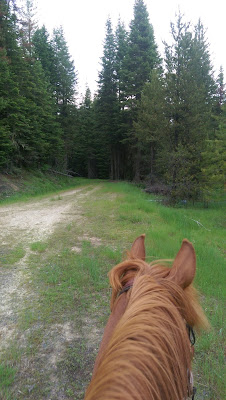 This was absolutely the most prettily adorned stump I've ever seen. I love how the flowers wrap around. I wish my camera could do it justice. Faeries must abide there, don't you think? 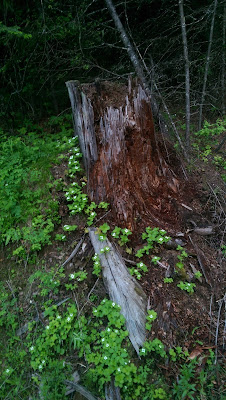 Amy hates it when I take her picture. But then she shouldn't wear such cool hats. And her horse has such a nice butt. 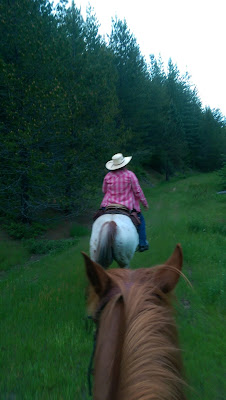 So this is where it gets cool. We got back to the trailers just as the moon was starting to glow over the mountains and Amy said, "Let's ride across the creek again."

When we headed that way we spotted a bull elk and his lady in the meadow just a ways across the creek. We watched them for a while until the were gone. Scout was a bit concerned because he couldn't see them well enough in the darkness to know what was moving over there. I just asked him to stand and face it, and I let him eat grass.

When they were gone Scout went suddenly, with great purpose, through the meadow, across the creek, and up the bank to the other side. He would have kept on going after the the elk if I'd let him. And then the moon was up in all its glory. 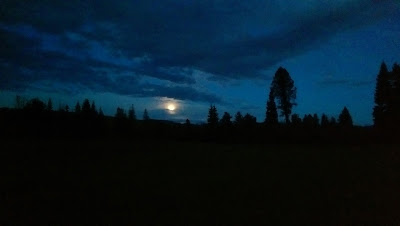 Eventually we crossed back over and tried to return to the trailers but the horses weren't having it. Scout became all purpose again, moving off into the nearer meadow.

We laughed. It was glorious. Bright moonlight and treeshadows.  Daisies scattered like stars come to ground. A horse, unguided, moving, moving. Our shadows one in the cold, clean moonlight.

We asked them several times if they wanted to go home. They declined. Finally we had to insist. I didn't pull into the driveway until 11:00, and I got a stern talking to from my worried son. My cell phone didn't work out there.

These are the moments we live for.

Posted by Andrea -Mustang Saga at 10:56 AM 2 comments: Links to this post

I took Scout out for his first solo trail ride this week and he did great! He had his Blue dog along for moral support. I think we did about 3-4 miles and he must have been really enjoying himself because he threw a (very tiny) fit and tried to head back up the mountain when we got back.

I guess I'll have to add more pictures later, blogger won't let me do it right now. Hope the video works!

I did take Scout on a short trail ride about a week ago. I even had pictures but then my phone decided to dump everything. It was a beautiful evening on a nice trail. He was nervous at first but settled in nicely, especially when I asked him to start doing some more challenging work off trail. He didn't want to turn back toward the trailer at the end. The next night my sister had a huffy mama bear with a cub trying to scare them off at the same trailhead, so that might explain the nerves...

Saturday we went to Montana for an outfitters dispersal sale and I almost brought home a good old horse (and fell in love with a couple old mules too) but I was outbid and we came home with an empty trailer. It was kinda heartbreaking. I passed up on a horse I really liked because 3 horses I liked better were coming up later, and the bidding went high on them.


We hurried home since we didn't have a horse to worry about, and it turns out maybe it was a good thing we didn't win any bids after all. If we had, we wouldn't have been home when the call came in that my father-in-law was crashing. (He had been in intensive care for 3 weeks.) By the time John got to his mom's house to go with her to the hospital, his dad had passed away. We spent the day together trying to get our minds around life without him. John's mom has been taking care of his dad for so long. They've been married over 50 years. It will be difficult, but life will have to go on.

Today I worked for the equine dentist and Bella got her teeth worked on. I waited too long. They were bad. But not horrible. She wasn't super happy about going somewhere without a buddy, and she did NOT like the goats. She was pretty happy in the round pen though. 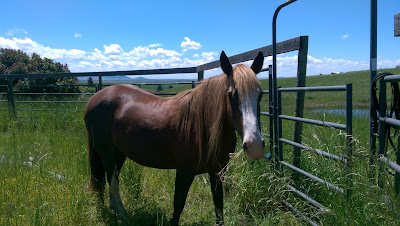