I absolutely LOVE my new saddle! I rode Duncan twice yesterday, once in a flat pad and once in a my Ricotti pad. The Ricotti pad has a gradual build up in the wither area and was a perfect fit. 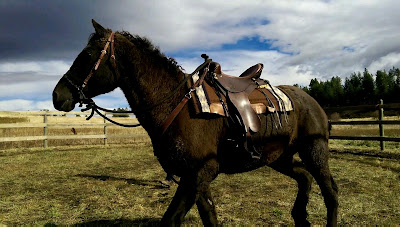 This saddle was made on a wide tree, but they can adjust it a bit because they put some sort of flocking or padding under the bars of the saddle. I'm hoping it will work without sending it back to have that done though. It was also made for a man, which works for me because I need a narrower seat since the accident screwed up my pelvis and hips. The guy it was made for was close to me in height, weight, and inseam. Pretty cool. :)

The seat us super cushy with no pressure points anywhere, and the leather is kind of grippy. I love love love it! I even love the English billets. Less bulk, easy to adjust.

Duncan is doing OK with riding. Stops and goes and turns. He bleeds to the right with his shoulder when turning left, usually in the direction of other horses. Backing up is sloppy but I don't do it how the trainer did, and half the time I try to do it how he did, which just makes it confusing for both of us.

I think we need to get out of the round pen now, but the weather isn't really cooperating. Wind and rain and slick footing. I'm thinking about finding someone who does lessons in an indoor arena. I definitely am more driven to ride now! I love my horse. :)
Posted by Andrea -Mustang Saga at 8:26 AM 4 comments: Links to this post 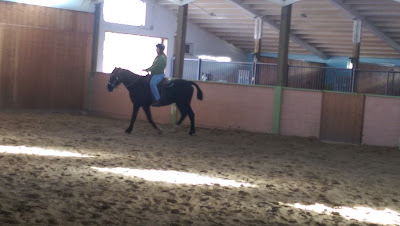 Duncan didn't learn much at the trainer's.  I'm not sure if the guy didn't ride him as much as he was supposed to or if he just isn't a very good trainer.  At least he didn't do any major damage, and Duncan has carried a rider at all gaits and is more forward moving.

The saddle I thought fit Duncan didn't, so we tried some saddles on him and determined that a Crates saddle with the Steele Equi-fit tree would fit him.  So I bought one.  I don't love it, so I kept looking.  Meanwhile, I sold my good saddle.  It was kind of hard to see it go, but John and I agreed that it was a good idea because it's so heavy and it's not a good trail saddle because the fenders are not free-swinging, especially forward.  And since it was worth so much, we could pay for another month of training and a good saddle for either Duncan or Scout.  The Crates fits Scout really well.  I'm still on the fence about the fit for Duncan.

Fast forward a bit to Scout modelling a friend's Orthoflex saddle.  It's not a good fit for me, but it was fun to play with. 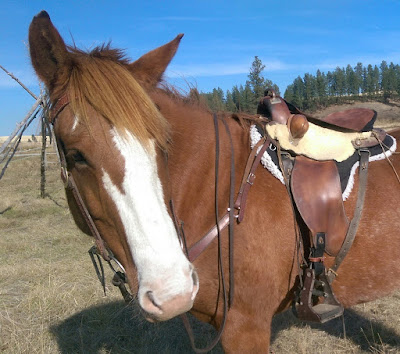 Duncan and I had a kind of iffy ride the day after I brought him home, but then the next day we had a great ride.  Still in the round pen. He eventually relaxed and started to reconnect with me instead of trying to respond while trying to keep an emotional distance.  I took a video of our whole session and actually watched the whole 33 minute length without getting bored.  I should do that more often to keep myself improving.

Here's Duncan in the Crates saddle and my smallest breast collar I had to dig out of a box.  I don't like where the breast collar dees are on this saddle.  It makes for a weird fit even on big ol' Scout. 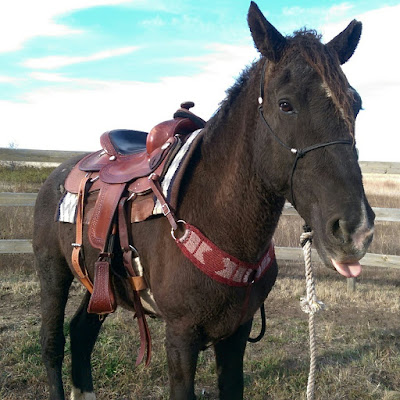 Next I'll be riding him in another new saddle, a Synergist.  I hope it works out.  It's the most comfortable saddle I've ever sat in.

Also, I've hired a lawyer to sue my insurance company for payment on my uninsured motorist policy from when I was hit in April.  Apparently State Farm is the worst when it comes to getting a payment.  So.  We'll see how that goes.  Meanwhile, I'm going to get some more treatment and diagnostics for continuing brain and body issues.  It feels good to be working toward a solution instead of procrastinating and worrying that I'll never be the same again.  Should have done this sooner!
Posted by Andrea -Mustang Saga at 9:12 AM 3 comments: Links to this post