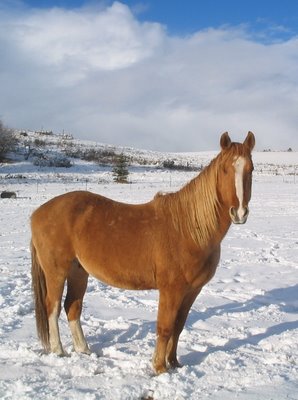 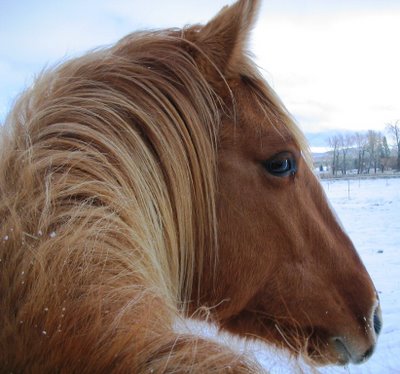 Tonka was such an incredibly good boy for his trim today. I just trimmed his fronts, because I know how hard it is for a young horse to stay focused on one task for long, and I'm not a very quick trimmer. As it was he was mouthing my back and licking snow off the leadrope and basically being distracted. He stood like a rock whenever I picked up his foot though. Then when I'd put it down he'd do a little bit of defensive behavior, backing up and facing me and all the tools, like he'd rather I wasn't next to his leg. But when I went back to work he was still as could be. Well, other than the snow licking and such.

Then I trimmed Lyric's fronts, because I may as well get 4 hooves done. Tonka thought he needed to hang around for moral support, and then help with the tools when I left them alone for a minute. Later I was taking pictures and Soxy decided that I really should be petting her, so she came up behind me and nudged me. It was very sweet. I wish I had more time just to be out in the pasture hanging out with them. It's nice when they include me in their lives.
Posted by Andrea -Mustang Saga at 6:28 PM No comments: Links to this post

Last night Della and I got to go out for our birthdays (6 months late). Part of the deal was that John would feed the animals if I got the feed all ready to go. I got home before he fed, but he fed anyway. It was really seeming like it was taking a long time, but I don't know how long it usually takes me, I just do it. Then he came in and told me that someone had gone through the part of the fence that's just 3 strands of cheap electric tape, and Soxy, Tonka, and Lyric had been out. Soxy went in with just a little fuss. John opened the narrow gate for Tonka, and Tonka just walked in like, "Oh yeah, this is where I need to be, thanks." This is a gate he usually stops to think on before going through. This he did with no halter, in the dark, with Lyric being a scaredy cat nearby. And John never handles or messes with him, so I think it's awesome that Tonka trusted him. John didn't realize yet that the fence was down, so let him back into the area where there was essentially no fence along one side. But Tonka followed him through another gate and into the big pasture where the fencing was still whole. Wow, that's my boy. He's amazing.

I went out this morning to check them over thoroughly, and nobody is hurt at all. I wonder why someone went through the fence. Maybe a moose came through? The dogs were barking madly about an hour before John went out. I wish I knew what happened. I'll look for tracks when I go fix the fence.

Another funny story from the other night: I took Maya, my dog who loves to do chores with me, out to help me feed. I was walking through the area where I feed Tonka, Lyric, and Soxy. They usually come in from the pasture and get there just after me. Maya knows better than to go into the fenced area unless invited, but I heard a very quiet noise behind me, so I turned around, saying, "Maya?" RIGHT in my face was Tonka, blinking and flinching from my headlight shining in his eyes, and looking totally innocent and curious. He snuck up on me! I don't know where he came from, or how he got that close without me knowing. Silly boy.

I sure do love my mustang!
Posted by Andrea -Mustang Saga at 11:16 AM No comments: Links to this post 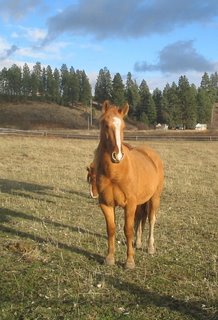 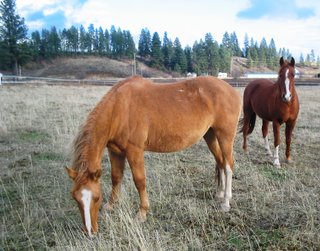 Here are some pictures of Tonka from yesterday. He really is growing nicely, but he still looks like a baby to me. I've spent some time with him the last few days, just grooming and messing with feet. He's a sweetie and I am so looking forward to our lives together. I have very high hopes for this guy. Not that I expect him to become famous or great or anything, but I do think we'll have a lot of good times together. I really can't wait to see what he looks like next summer, and 3 years from now, and...
Posted by Andrea -Mustang Saga at 10:59 PM No comments: Links to this post

I have not posted, nor done anything much of interest with the horses for about a month. My daughter got really sick starting on the day of that last clinic we went to. For about 10 days we thought she had the stomach flu. I would have taken her to the doctor earlier, but I talked to the nurse and she said that these bugs can take up to 10 days. Finally Katia's stomach cramping got bad enough that I took her to the doctor, thinking they'd tell me that it's just a bug and to go home and wait it out. Well, we got out of the hospital 2 weeks later. Her appendix had ruptured and she had the equivalent of 2 pop cans of pus in her abdomen. They had to very carefully clean it out from around her intestines and take out her appendix too, of course. The infection was system wide, with even her blood infested with bacteria. She couldn't eat for over a week, couldn't even have intravenous nutrients until the bacteria was out of the blood. Finally at about a week and a half they gave her the okay to eat. Appetite was nil, and she was still running a low-grade fever so they thought she might have new abscesses forming that they may have to insert new drains for. This we found out about after they had just pulled the original drains, which was horribly excruciating. Went in for another CT scan and found nothing new to drain. Wonderful news! Then they started talking about a going home day. So she came home last Sunday. During the two weeks she was in the hospital John and I took turns coming home feeding at night, staying in a real bed, and feeding again in the morning. Of course the first night and the night before the second CT scan we both stayed in the hospital. We were, and are still, exhausted. Katia is still on IV antibiotics, for which we hook her up to the machine 4 times a day, for a half hour each time. With prep time it takes a little longer. The midnight dose is a bit of a nightmare. Hard to keep your wits about you, but very important not to mess up! The 6 AM one isn't much better. We also change her wound dressing twice a day. Originally the plan was to have a nurse come out twice a day, but we've proven to be quite competent and she's only coming out once a week to change the dressing on the PICC line, because it has to be absolutely sterile. (The PICC line is like an IV, but can be left in longer, and runs in a tube from her elbow almost to her heart.) The nurse is very nice, and also has horses. She does search and rescue, which I am going to have to ask her more about next time she's here. Katia's staples came out yesterday. There were only 3, because the wound had to be left mostly open so it could be packed to wick the infection out. She also got the go-ahead to shower. She's really healing well! It's no longer an interior wound. The doctor compared it to a scraped knee. I disagree, it still looks pretty major! But in terms of getting wet and such it can be treated the same way.

In the horse department all is well, if a little short on attention... Except for Soxy, who got sick at about the same time Katia did. Just a little depressed, slower, less interested in feed. Couldn't figure out why until 2 weeks later she got a big lump on her chest. Pigeon Fever. Took her to the vet on Monday and they lanced it. Grody. Luckily I am not too phased by grossness. Baseball sized abscess full of thick yellow pus and blood and other fluids. It's still draining some pretty nasty stuff. I am keeping her isolated (poor girl!) and luckily I don't have to flush or mess with the wound in any way. Just giving her some bute to help with the pain and inflammation.

Tonka is looking more handsome every day. He's really growing into himself. His winter coat is really thick and soft. He's always been soft, but with the added thickness he's even more of a teddy bear. The farrier, because of some scheduling problems, is about 4-5 weeks late coming to trim. I really need to work with Tonka again before Friday, but I don't know if I'll be able to. Last trim cost me $10 more just because it took a little longer. More of a training session than it should have been. Not that he was "bad" and of course it didn't get violent, but he kept backing up... Just required more patience.

I'm off to bed...
Posted by Andrea -Mustang Saga at 9:41 PM No comments: Links to this post