This morning at "bag check" Juniper actually had a little mammary development. She's thinking about making milk! It was just a little thickening behind her teats and it doesn't mean there will be a baby today by any means, but it's a big, noticeable change. Now I absolutely need to get my fences in order for a little one.

She, don't tell anyone, but there's a crow in my house, learning how to eat cherries on my living room floor. It's just about the cutest thing you ever saw. I love her.
Posted by Andrea -Mustang Saga at 9:35 AM 2 comments: Links to this post

Camping has not included horses this year, but it has been relaxing and uncomplicated. 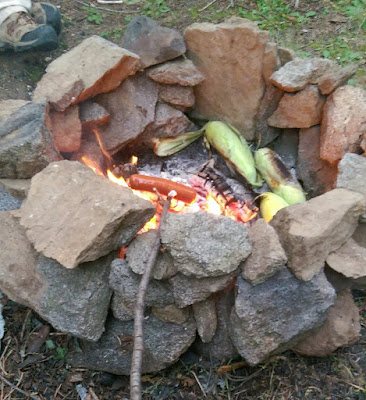 Juniper and I went for a walk and all the neighborhood horses were so excited about her. Do you see the colts behind the bushes? 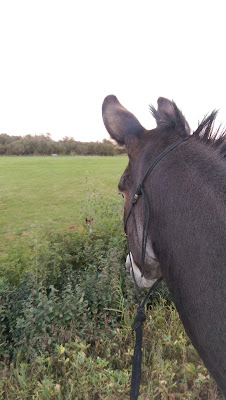 I love her expression here: 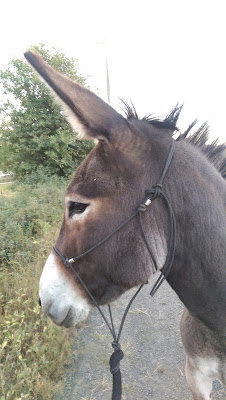 Baby on board? I don't think she slipped the foal, but she's sure hiding it well. According to my unreliable information, she could technically give birth any time from now until November, maybe longer if she's stubborn about it. Don't worry, she isn't looking imminent at all. No bag and no other signs. 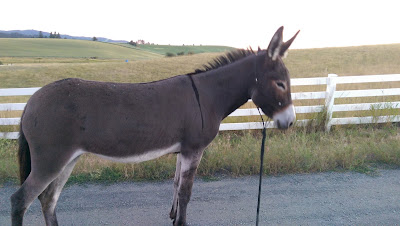 I think this might be my favorite picture of her yet: 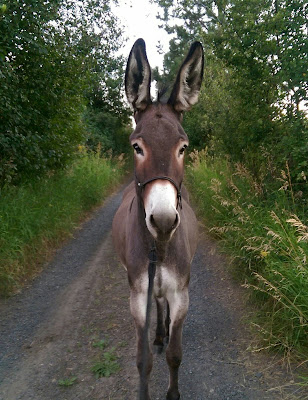 Scout was surprisingly well behaved the other day when we rode. 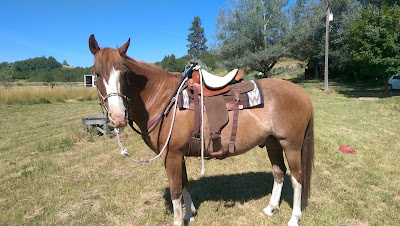 The alien isn't so scary now. 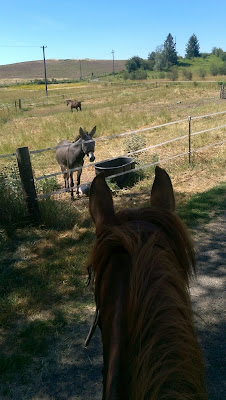 I guess the Fabtron saddle doesn't fit as well as I'd hoped. Boo. 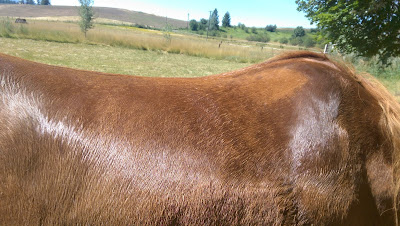 Posted by Andrea -Mustang Saga at 1:31 PM 7 comments: Links to this post

Just after I mounted up last night Scout noticed Juniper and Duncan playing and he freaked out. I thought he thought they were spooking at something, because he wouldn't act that way over something as silly as a new fly mask, would he? 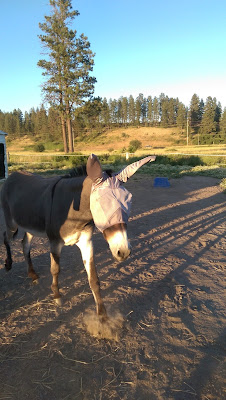 Why yes. Yes he would. I dismounted and eventually took the fly mask off and he felt better about Juniper, but he was still worried about the fly mask. We did some basic, calm ground work and he kept going back to visit the fly mask, and eventually we gathered our brains and had a nice little ride.

Juniper didn't seem to mind her fly mask once I had Duncan try it on. It didn't smell like a horse so it was a suspicious article to her at first. Duncan didn't like the long ears. 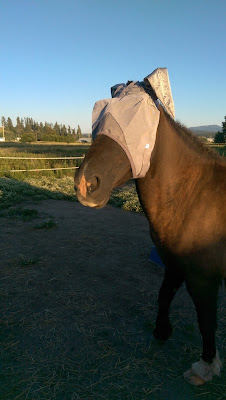 Scout got a different "gift" in the mail. I've needed these since my old set went with my good saddle. These are made by weaver leather, the wider width "Utah hobbles" and they're great quality. 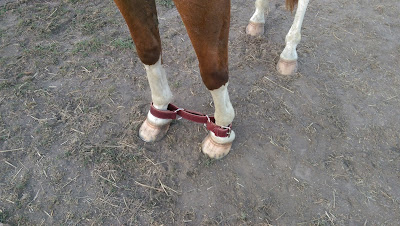 His hooves are a bit long. I guess 7 weeks between farrier visits this time of year is too long. Bella's hooves are busting out and I had to trim one of Duncan's because it started to split. I wish my farrier would do a barefoot trim. I like the guy a lot but his trim is too long, dang it.

I gotta go. I hope you have a beautiful day! 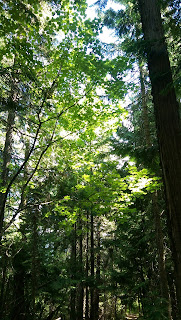 Posted by Andrea -Mustang Saga at 6:28 AM 2 comments: Links to this post 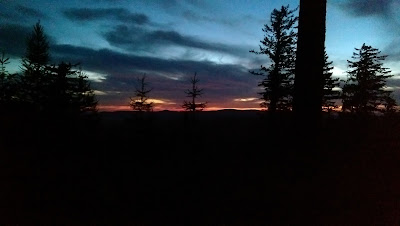 My sister and I went on a super easy, quick camping trip Friday night. It was great. We ate dinner before we left so there was no need for a lot of gear or food. Just sleeping arrangements and I brought my fancy chair.

I only brought Huckleberry because Blue barks incessantly. Huck only barked when he needed to. A couple times at prey animals (we could tell by his bark and the fact that he ran after it a short distance) and one visit from a predator. 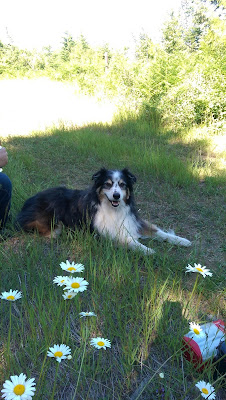 His approach with the predator was completely different. He caught wind of it and walked back and forth, trying to locate it. My sister saw its eyes and Huck gave one bark and ran to us, shaking. The critter didn't run off until it heard human voices. It was probably a bear? We were right near a bunch of huckleberries. Maybe wolf or cougar. Not coyote. He's not afraid of those.

Of course I missed most of that, I was dead asleep until the bark, the yelling, and the broken branches as the thing ran away. Amy was observing all the interesting Huckleberry behavior.

The next time he barked I was like a ninja, up out of my sleeping bag with my bear spray in my hand before I was even awake. :) But it was just a deer or something.

We slept in until 9:15! So we didn't hike. We had a leisurely breakfast of coffee and power bars, looked for critter tracks, and I picked a few huckleberries. 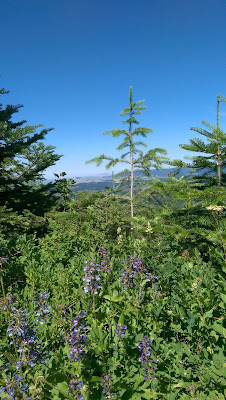 We made it back to my small town before the coffee lady closed at noon, and it was lovely! 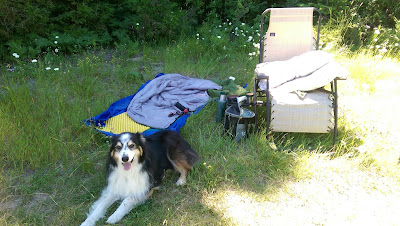 I would have gone back out last night but Liam backed out on me and John didn't have enough time to get his gear together. He likes to take everything including the kitchen sink.

The days are so hot it doesn't make much sense to do much with the horses, unless you get up super early or stay up late. Maybe take them camping next time...

This morning before it got hot I opened up a new small section of pasture for Bella and Scout. I moved the temporary fence in plain sight, and they were interested at one point but then went back to grazing.

A little background: every night I call them in with their vitamin supplement from near the round pen and lock them in there for the night.

So at first when I called them from the tall grass on the other side of the round pen they were like, "Nah." It was the wrong time of day and there was no sign of food.

I persisted and they became intrigued and came down. Their different responses were really interesting and got me thinking about intelligence and our perception of it.

Scout charged down the hill and ran through where the fence had been, excited to eat the new grass.

Bella came down more carefully, following her usual path, and put herself in the round pen as per her daily habit. She nickered at us on the other side, not quite sure how to join the party, but she wasn't terribly upset.

At first I was shocked and thought Scout was smarter than his mama! No way! But then I got to thinking maybe it's not smarter to charge into a new situation. Maybe for a horse it's smarter (safer) to stick with routine, not try new things without checking them out first. She and Scout have completely different formative backgrounds, with her growing up wild and him growing up here in a very safe, controlled environment. And of course, their personalities are totally different. He loves to explore (destroy) new things (anything he can get his mouth on). She is content just being a horse.

Interesting. Who is smarter? How do you gauge it? By human expectations or horse expectations? Wouldn't it be fun to study?

I've heard people say they hate sheep or chickens because they're "So Stupid!" but I never saw them that way. They're not people. They're smart enough to be what they are, and that's just fine. Stick together, keep out of the way of predators, and eat. And have little squabbles and relationships and cute little lives that are actually quite interesting if you slow down and watch them and don't expect them to be "smart" in some way that they're not. Probably the humans who were complaining about them were trying to work with them in a way that didn't fit their nature (couldn't get them to cooperate) and so perhaps it wasn't the animals who were stupid after all? :) I admit I've fit in the stupid bracket more than once working with different types of animals. It's a journey... 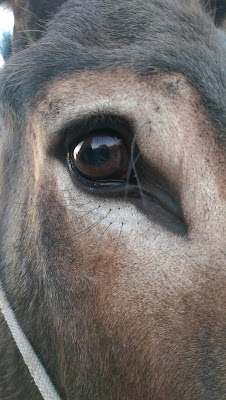 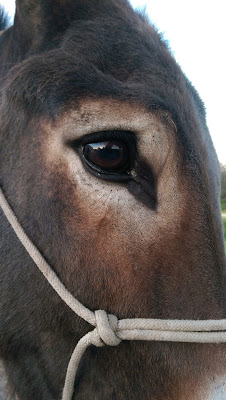 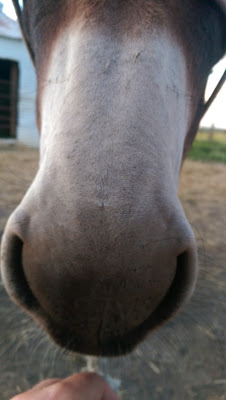 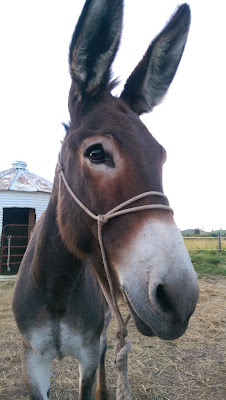 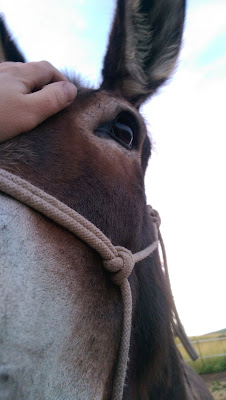 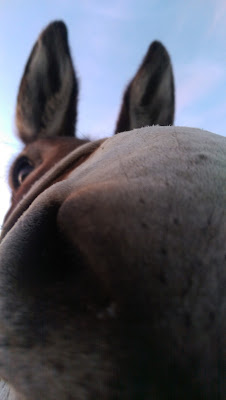 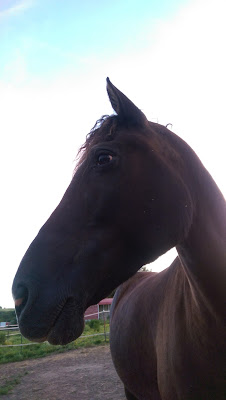 Posted by Andrea -Mustang Saga at 8:48 AM 3 comments: Links to this post