Juniper is doing great, super sweet, and learning a little bit about picking up feet and not biting people when they don't love her enough.

Duncan had his hooves trimmed, half by me and half by my husband, who I was teaching about trimming for the first time. Duncan was nervous and it was a lot of information for John to absorb at once. John said, "Let's hire a farrier." :) Which I would if he could get up and down my driveway. We won't be able to use the driveway until Summer, I swear. Too much ice.

I am in so much pain right now! Did you know that if you overuse ibuprofen you will have withdrawals coming off it? I sure didn't. I thought I was trying to stay on top of the inflammation in my neck but I shouldn't have been taking so much ibuprofen. It may be causing some of my problems. So now I'm cut off. I'm doing a short course of prednisone. I guess it's supposed to get me through the withdrawal period. The neurologist also has me starting an anti-depressant to boost my serotonin levels, which may help my brain heal. It could take another year or more, but he hopes it won't. The truth is, they don't really know why the brain does what it does. Or doesn't.

I also learned that I do have a herniation at the base of my brain, not related to the accident. It's probably been there most or all of of my life. It's called a Chiari malformation and mine isn't severe but it does explain some problems that I've been having for a long time. Nothing to do about it. There is a surgical option where they remove part of your skull to make room for your too-big brain, but I'm not into that at all. That would be more for people with a much more severe case.

It's interesting what I don't remember from my visit with the neurologist yesterday. I took John with me and he keeps telling me stuff I don't remember the doctor saying. I guess I'll have to ask the doctor to go over it all again when I go back in 6 weeks.

He did say he had no reason to think I won't ride again, but I didn't tell him I land on my head sometimes. I'll save that conversation for next time. Weighing risks versus rewards, I'm thinking I might be a hiker rather than a rider now. But time will tell. I can't see myself without horses to care for. So they can at least pack my picnic.
Posted by Andrea -Mustang Saga at 3:41 PM 2 comments: Links to this post

I don't have any pictures because I've only been able to play with Juniper in the dark. She is so sweet. She's kinda itchy and she has a couple spots of rain rot, so giving her a good scratch makes her very happy. She's clingy. I feel bad leaving her behind. I could probably take her to work with me but she wouldn't fit in my back seat. :(

Last night I rubbed her all over and practiced picking up feet. She was very cooperative. I'm not asking much yet, I didn't try to keep her feet at all.

She's so skinny! You can't tell in her pictures because her coat is at least 2 inches long. She would be scored as "poor" on the donkey condition scoring chart. I'll deworm her on my next day off. And again later. Then hopefully she'll just keep on growing and gaining weight. She just gets free choice grass hay now, and I think that will be enough to help her gain weight once she gets rid of all her little parasite friends. She's started eating her vitamins and minerals as well.

I know straw is a popular feed for donkeys because they need more fiber and less sugar, but I just can't imagine a donkey eating it. Bob and Pedro wouldn't have. They were pickier than any horse I've ever met. I'll probably buy some and give it a try at some point.
Posted by Andrea -Mustang Saga at 5:56 AM 2 comments: Links to this post

The Adventures of Juniper Jones!

She's home! It took some time to load her in the trailer. The step-up was really high, it was loaded up with shavings even higher, and it had just been used to haul pigs. She wasn't really freaked out about it, but she just couldn't take the leap to get in. So two people formed a human butt rope and shoved her in. Not ideal at all. But I have all the time in the world to work on trailer loading now.

Because of the ice and the hilly road, we had to park at my neighbor's and walk home. I wasn't sure how that would go. She hustled right on home! I wasn't dragging her, she was making me hurry. :) She has that forward, adventurous nature I was hoping for. 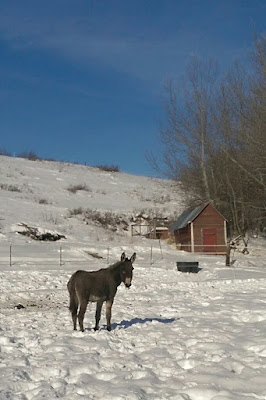 Above and below are the same picture. I love this phone app. 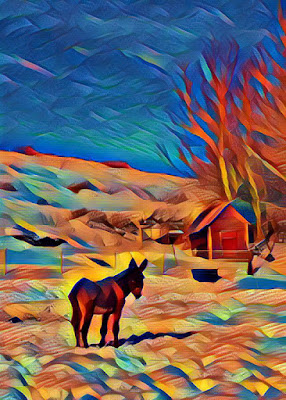 She's never been in electric fence before, so the first thing she did was duck under the temporary fence. Poor planning on my part. But I did put the safer horse in next to her just in case. The fence didn't shock her because her hair is so long. She and Bella had a few words, but that seemed to be all they needed and they got along fine after that. 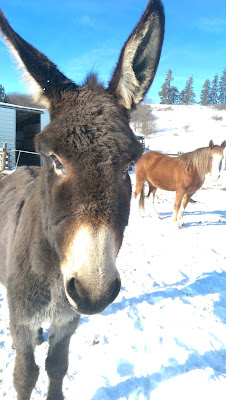 I could tell Juniper was about to head out to the big pasture, way too close to Scout, who would hurt her if she somehow got in with him. Liam and I scrambled to make things more secure by adding a second strand to the temporary fence and the gate to the big pasture. She shocked herself once and now I don't think she'll do it again. She was very wary of the fence after that. 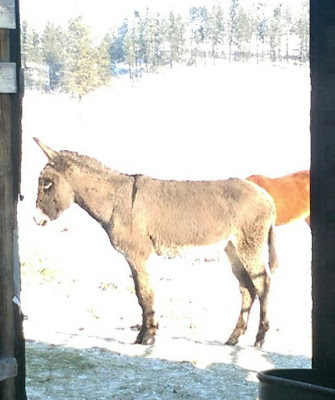 I love her! She's such a sweetie. 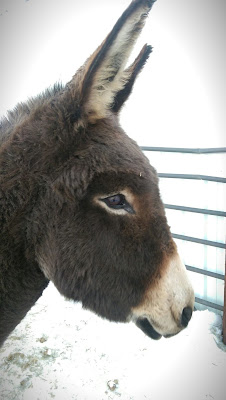 She's not sure what to think of the dogs. 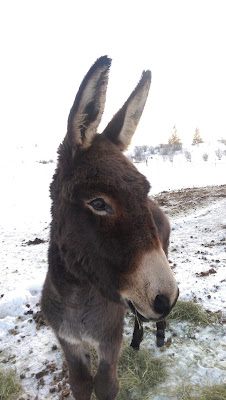 So I got a different story on her this time. Now they say she is the daughter of the 16 hand jennet who was also rescued. I had hoped she might be because they look so much alike. But at 12.2 hands at 2 1/2 years old, I'm not sure I believe it. Here's her (supposed) mom, Olive Oyl: 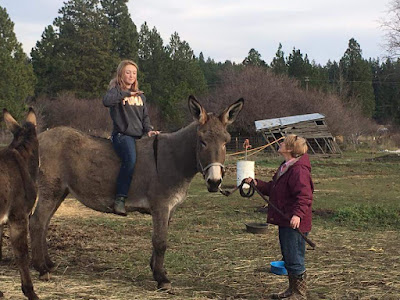 And there is the possibility that Juniper could be bred. I'm going to talk to a vet about that this week. I probably will just wait and watch. I'm not sure what the risks are with aborting a pregnancy, but it scares me more than having her give birth at a young age.

Heck, I'm even scared to deworm her. Not sure what to use to make it safe, considering she's probably never been dewormed. Luckily I work with a bunch of good vets. :)

Posted by Andrea -Mustang Saga at 5:58 AM 5 comments: Links to this post

Juniper is coming home today! With no notice, really. I'd given up on it happening this week, and suddenly got a text late last night that today was the day. So I have some work to do this morning. I'd had everything set up for her, but over time the horses took over again. So I have to move the boys, make sure they have access to shelter (even though they won't use it) because a bunch of rain is coming, and fill their trough. Not too much work, except the snow is knee deep and the temp is below zero. I've gotten pretty used to the cold though.

It was only 10 degrees yesterday, but it was a beautiful day. I got Duncan out for the first time in months. I remembered how much I like him. :) We just walked around a bit.

He decided the untouched deep snow would be perfect for a roll. 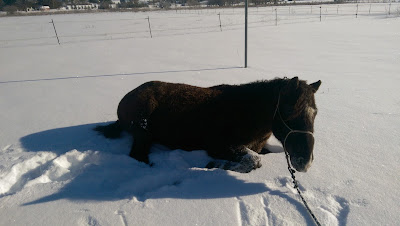 My phone will only sometimes take pictures without shutting off, so it's really hard to get good pictures. Either I need a new phone or a camera.

These pheasant landings were too cool not to share: 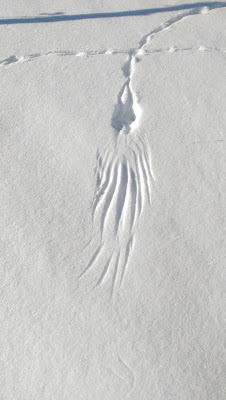 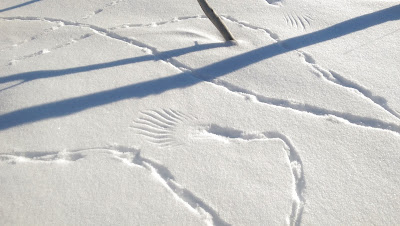 Anyway, wish me luck getting my girl loaded and led home from the nearest safe parking spot. My driveway is still impassable, but luckily it's not too slick to walk on.

Posted by Andrea -Mustang Saga at 6:49 AM 2 comments: Links to this post

Today the temp at 5am is -6 and the house is a little chilly, but no frozen pipes! The heater in the pumphouse is doing its job well. (Auto-correct wanted to call the pumphouse a penthouse. I'd like to live in a penthouse for the rest of the winter, please.)

However, I do have to walk maybe a half mile to get to my truck today. You know how a diesel pickup doesn't like to start in the cold? It's a long story, but my driveway is blocked by my mom's motorhome, I can't bring my truck home to plug it in, and my wonderful neighbors set up a little spot for me to park and plug in so I can still go to work. It's going to be a chilly walk. But I sure do like my neighbors!

Cross your fingers for me that my mom and AAA can get her motorhome back on the driveway and out of my fence. What a stressful deal for her.
Posted by Andrea -Mustang Saga at 5:45 AM 2 comments: Links to this post

I woke up this morning to no running water and -4 degrees outside. I put a good heater in the pump house and had water within a half hour. Just in time for everyone else to take a shower. :)

I'm going into my month of extra work, doing more than full time for the first time in a while. I'm looking forward to the better money but I'm also glad it's temporary. I'm finally just beginning to feel the itch to play with the horses again. I've barely touched them in months. But it's too cold right now anyway!
Posted by Andrea -Mustang Saga at 6:05 AM 2 comments: Links to this post

I'm half tempted to start a new blog titled "The Adventures of Juniper Jones." We're going to have so much fun. 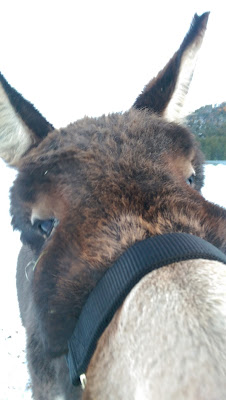 I visited her twice over the last couple days. She's a little spoiled now. Definitely gets treats and lots of love. She gets jealous if you pet anyone else. And if the water gets half empty, she stares into the windows of the house and brays until they fill it. Did I adopt a little princess? 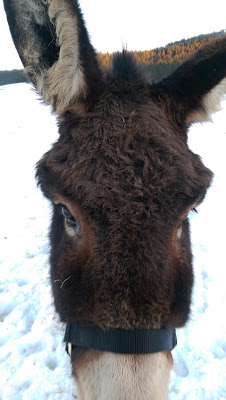 She leads OK, but she does have her own opinions. Luckily she hasn't learned she can get away, like some of the other ladies there have obviously learned in the past. 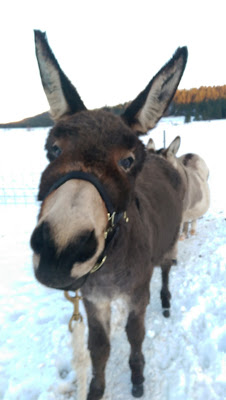 Next weekend she may be coming home. A lady who is adopting some of the donkeys offered to go out of her way to haul Juniper home for me. Because of the snow, she'll have to drop her off at the end of my road. We'll have to walk about 3/4 of a mile home. It might be interesting.

This lady is also possibly interested in buying Duncan. I am at a point where I think that might be a good idea. But it's a hard decision to make. I may not ride again, and if/when I do, I shouldn't be riding a green horse. Duncan would be better off with someone who can ride him well, sooner rather than later. We'll see.

Posted by Andrea -Mustang Saga at 10:15 AM 2 comments: Links to this post