Little Horse in a Big World

Well, we made it to the round pen.  Kind of launched in there on the tail end of a series of forward jumps, but hey, we did it.  Good thing I had the gate open to receive him.  :)

This is probably the first time he's ever grazed in his life.  What a thought.
(He was born in a holding facility - basically a feedlot situation) 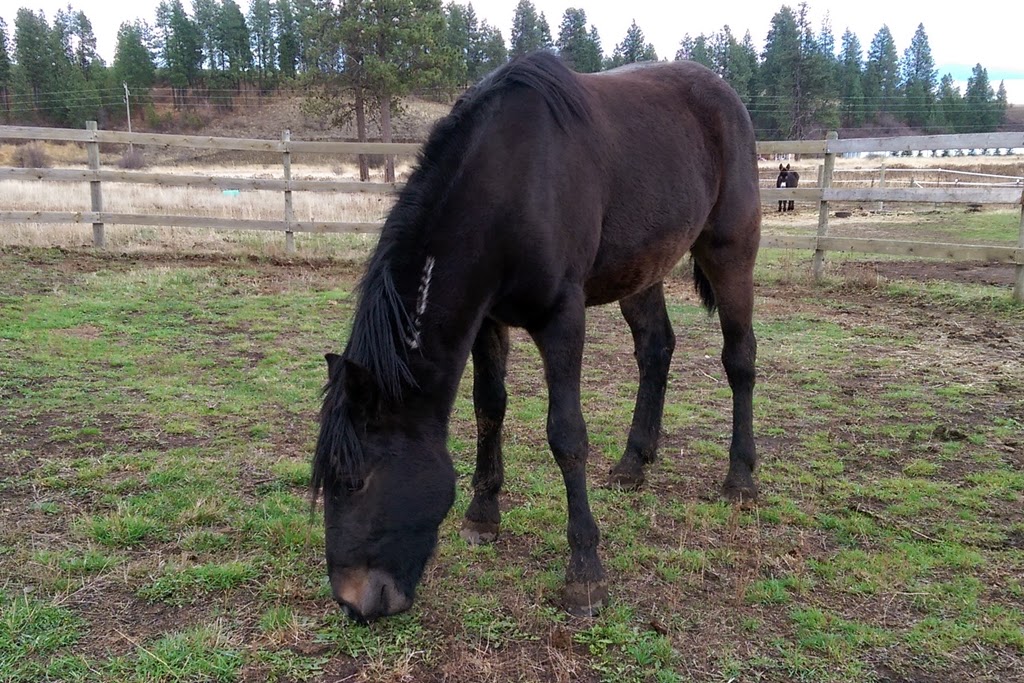 He thoroughly enjoyed himself. 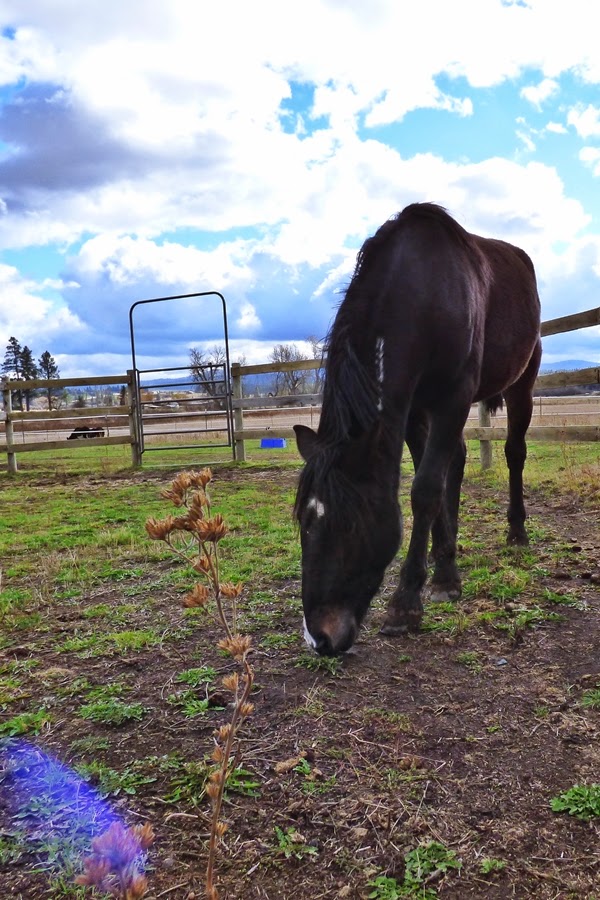 He still checked in with me though.  Mostly looking for treats, I think, but also wanting companionship. 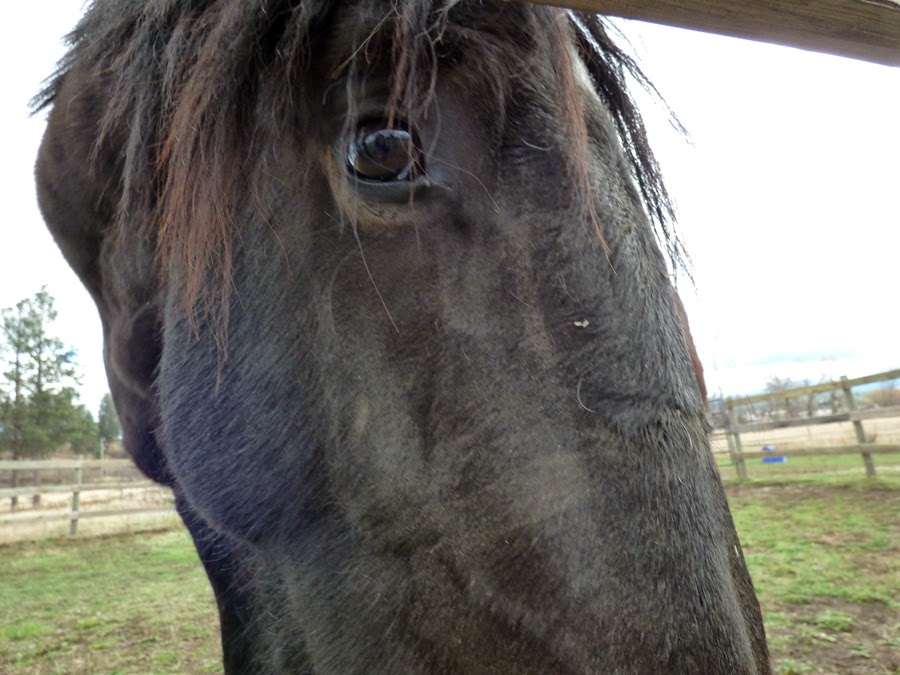 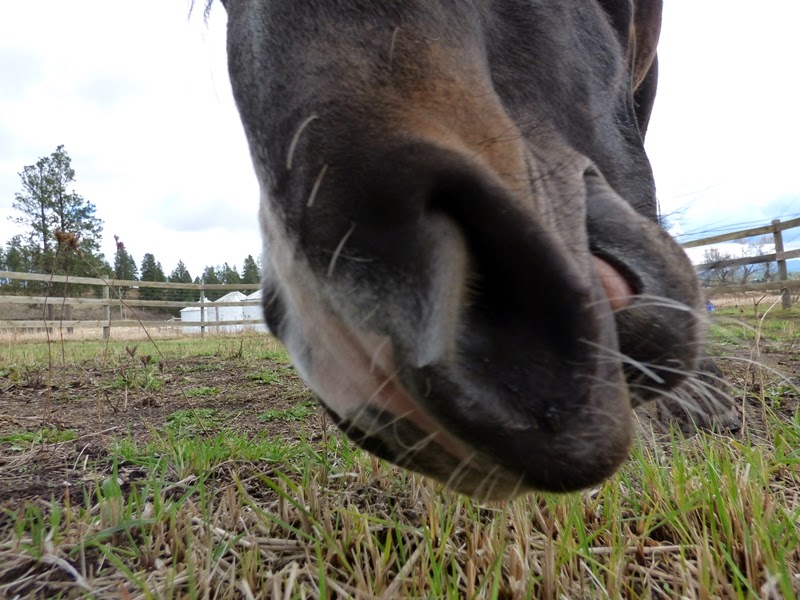 He looks really small in the round pen.  I sure do hope he grows. Meanwhile: Scout, outstanding in his field. 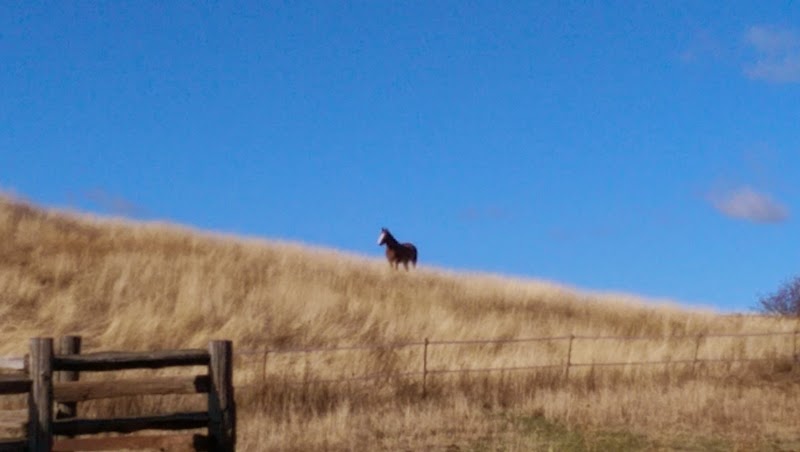 He sure isn't small.  Big tub o' lard.  I think he may have grown again - I mean upward, not just sideways.  Maybe it just seems like it because I've been hanging out with short Luc. 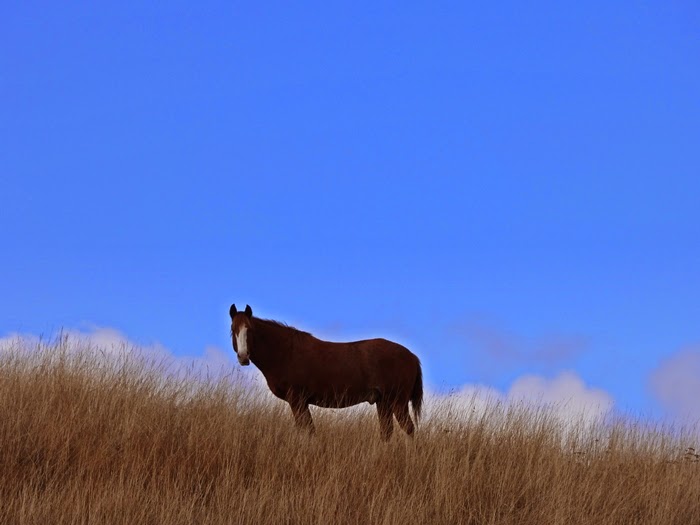 I was tempted to leave Luc in the round pen after his jumpy trip there, but we have some cold, windy weather coming in, and I didn't want him to be without shelter.  So I pulled on my big girl panties, caught him up easily, and walked him back to the mustang pen.  He did just fine.  I think he was relieved to be back in his familar place. 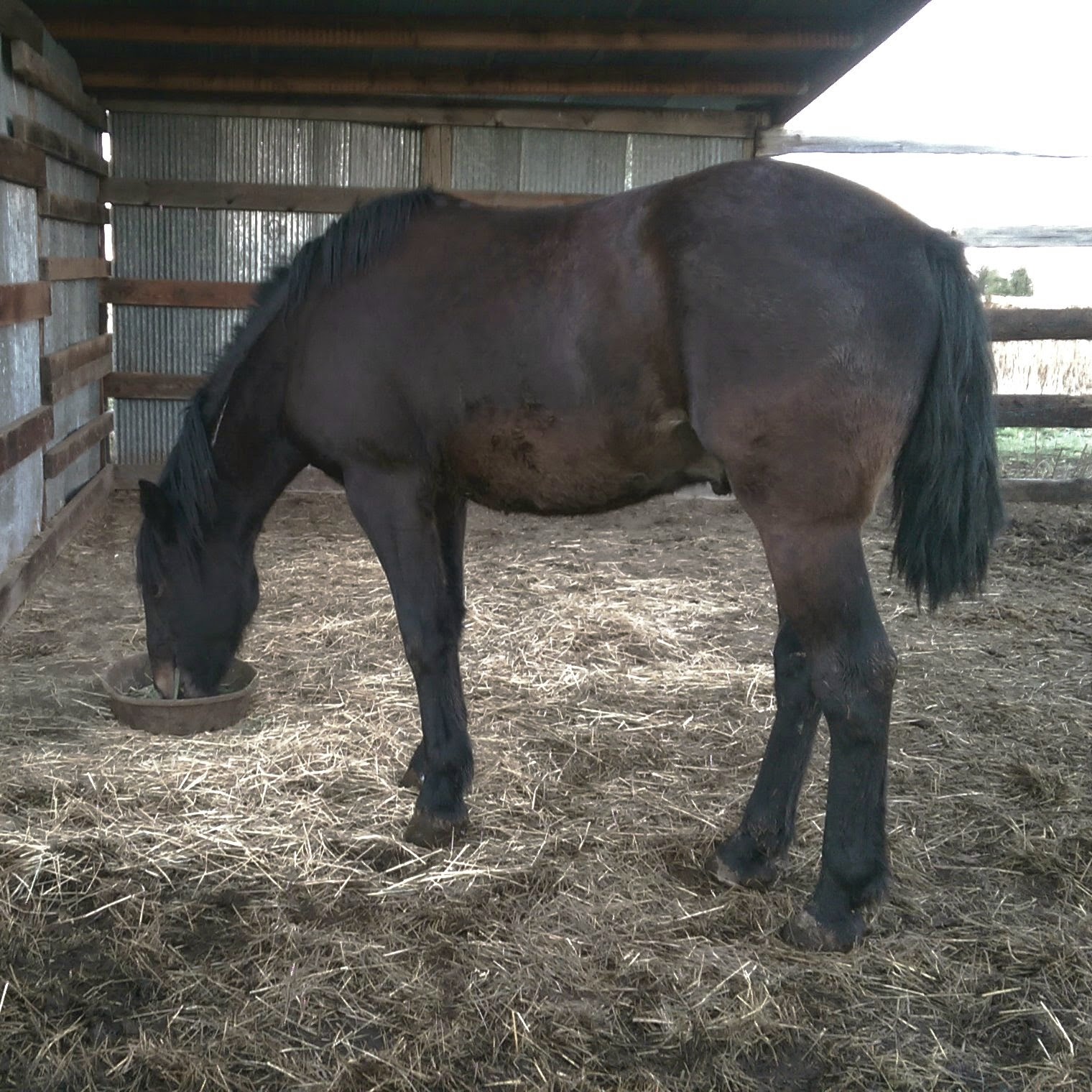 Posted by Andrea -Mustang Saga at 8:39 PM 2 comments: Links to this post 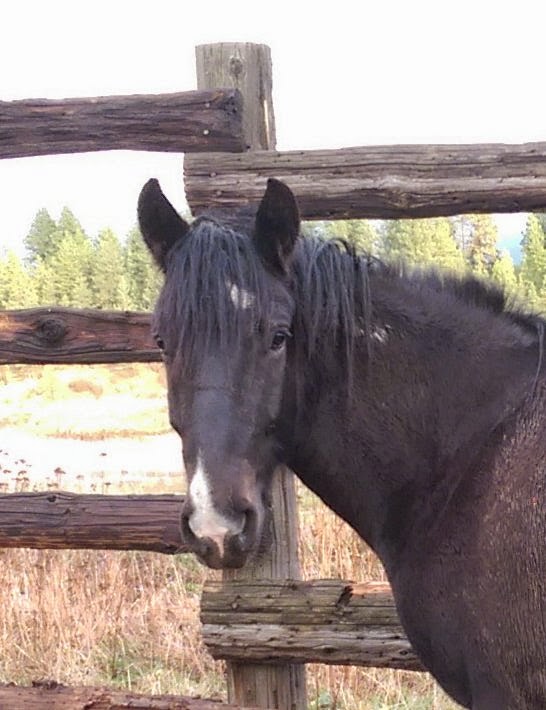 My poor little guy is still in the mustang pen. I agonized yesterday about whether to move him out or not. I decided there's no need to hurry.

He did graduate from having to wear his halter all the time and is now running around naked and standing nicely for haltering.

In preparation for him possibly getting away from me with the lead rope, I let him drag it around for a while. He thought it was weird but didn't act stupid about it.

Today we worked a little more on driving forward at liberty. He gets pretty spunky about it, and tried sticking in the corners with his head through the fence, but I let him know that wasn't going to work this time. He did better to the left than the right. Every other corner he'd turn around and I'd have to convince him to get going again in the right direction, which he would do under protest, too fast with a lot of head tossing. Baby stuff, baby steps...  At least he's getting it and keeping his head.

The grass is growing thanks to the mild fall we've been having, so I found some big enough to pick and took him a hand full. He went crazy over it! He found his purpose in life! It makes me sad to think he's never grazed before. Soon, soon...
Posted by Andrea -Mustang Saga at 5:10 PM 6 comments: Links to this post

I can't seem to get any good pictures of Luc. Either he's right up in my camera or it's too dark. Or both.

I got some mediocre pictures yesterday, which aren't really blogworthy but they're all I have. 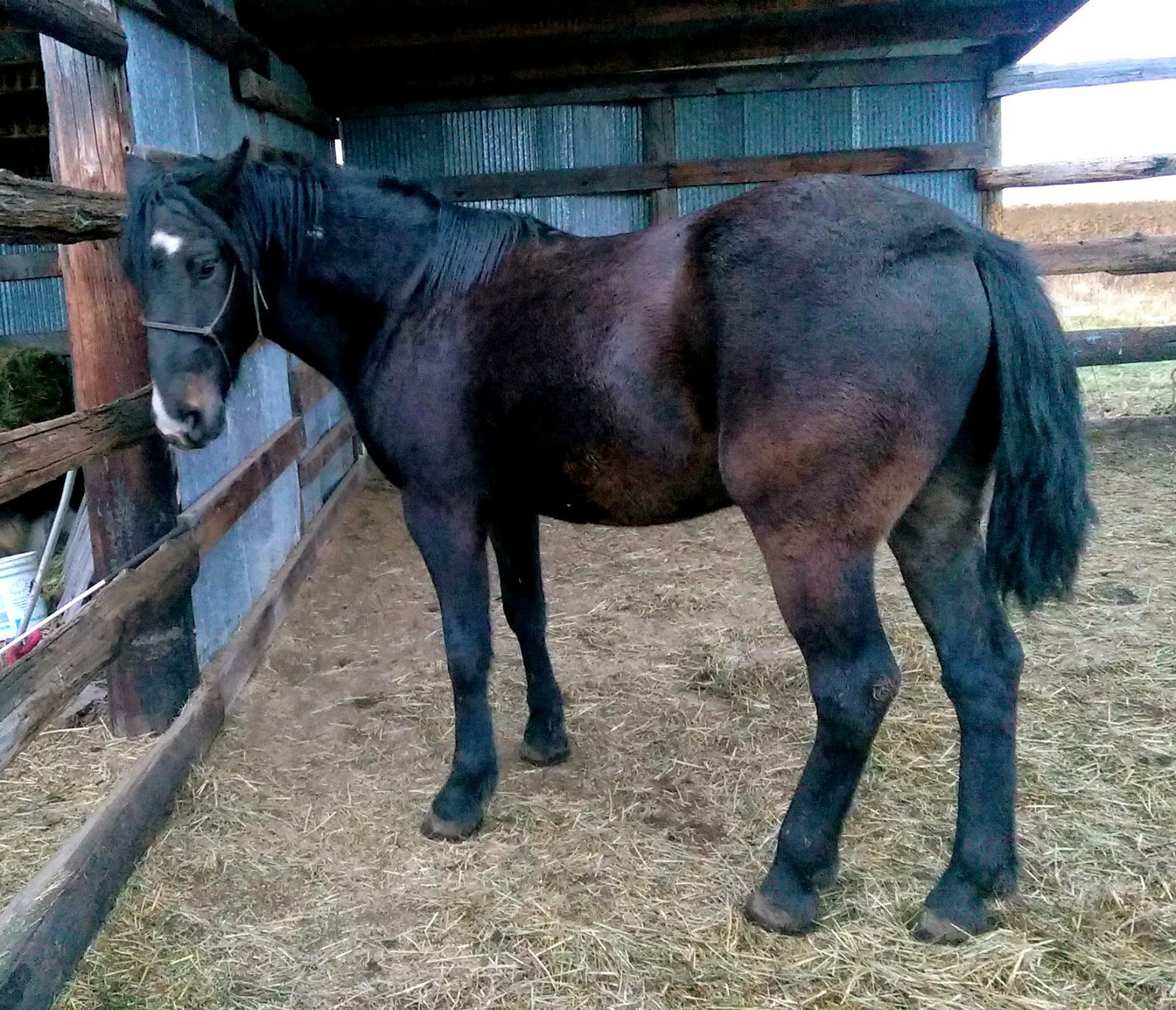 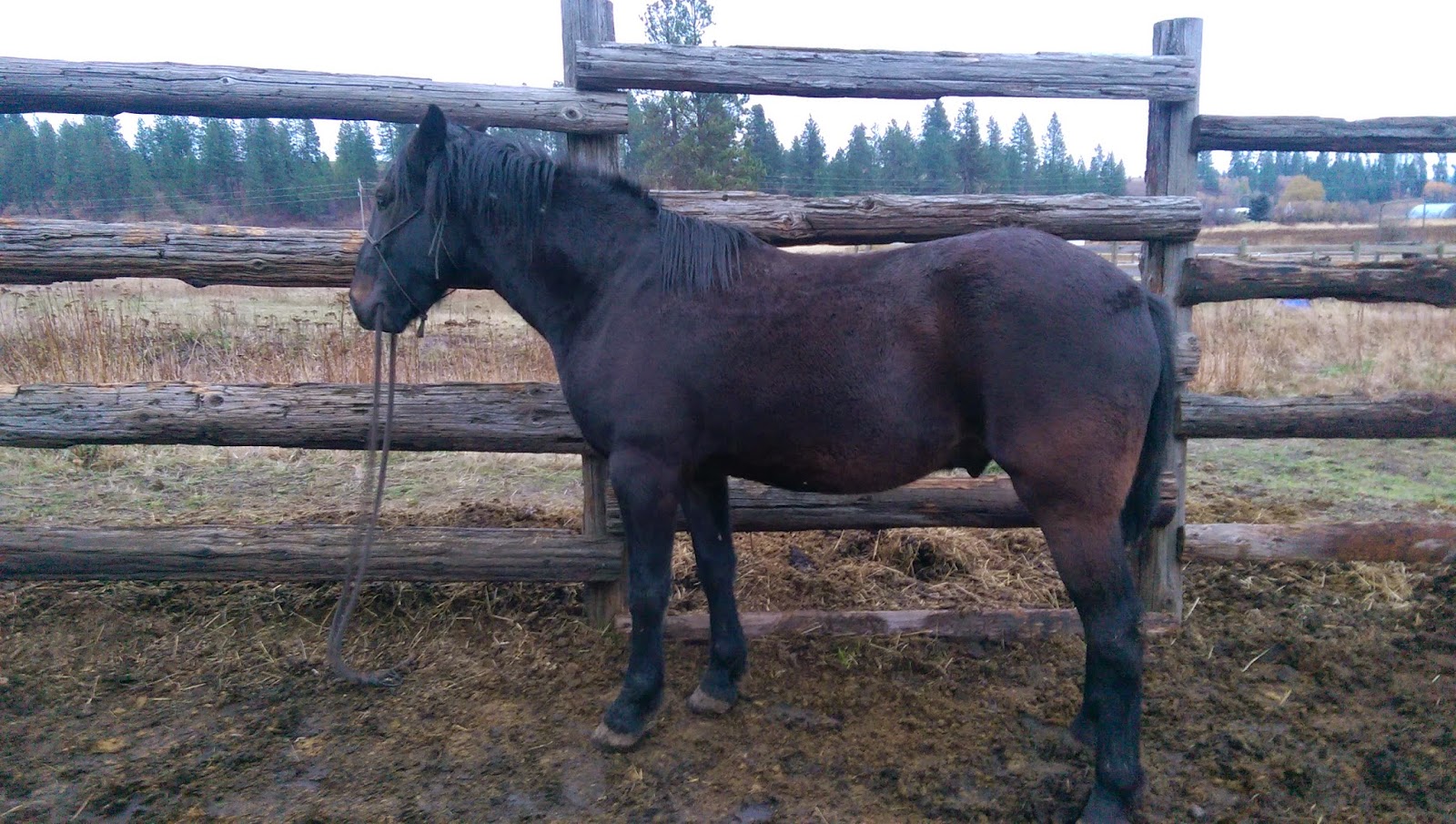 Poop cleanup is a pain in the arse now that the rain has come. Luckily he only poops in one area. I hadn't intended for him to be confined to the mustang pen for this long, but the horse sets the pace. Soon he'll be in a larger area, then grazing in a pasture for the first time in his life.

He has learned that he can be uncomfortable or under pressure and he will come through okay. Which is important. He is learning to move forward from driving pressure, and to move his hindquarters and shoulder independently. He backs a step when asked and is usually pretty comfortable about it. He has stumbled upon the right answer when I ask him to lower his head to halter pressure, but he hasn't really been able to do it consistently. I can rub his legs all over but haven't picked up his hooves yet. He's coming along slowly. Yesterday I was able to get out there with him for 4 short sessions. I wish I could do that every day. Now it will be dark when I get home from work, so I'm going to see if I can fit some time in for him before work. And I'm not going to allow anyone to take up my time on the weekends until I get him moved to better winter quarters. I can't wait to see how he settles in once he has horse buddies and room to move.


Posted by Andrea -Mustang Saga at 6:02 AM 2 comments: Links to this post