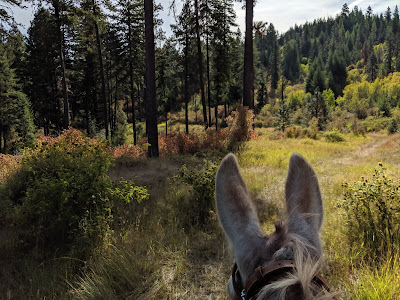 On our ride today Buster was choosing the route and it was pretty funny. We followed an old logging g road, then a wide trail, then a game trail, then we ran out of trail, and he would occasionally stop and think, then keep on trucking. I had a general idea where we wanted to go but he seemed to have a very definite idea. He'd never been to this area before and was headed directly away from where we started. Eventually I had to give him some guidance, which he took into consideration. At one point he refused my guidance and headed into a gully, fast, fighting the bit. That was when he didn't get to lead the expedition anymore. Still, no big deal, he is sure-footed and I felt pretty good about things. Opportunity for improvement. We worked on our stops some more after that. :) 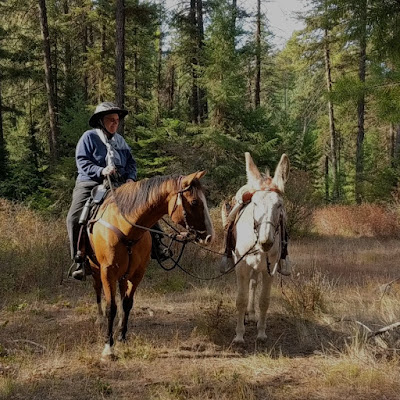 Today was his first ride out with a horse he doesn't know, and I think his 6th trail ride. He did great! He loaded into someone else's trailer behind the new horse, fully saddled. Way to go, Buster! Went to a new area, and I rode the whole time without dismounting but twice for gates, not because he was being impossible or anything. 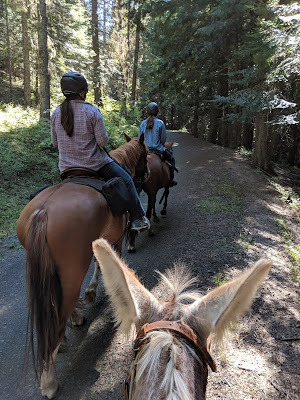 The two rides before that were uneventful. One short ride with 2 friends on Scout and Sawyer and 3 hikers and 2 dogs. And the next ride was a super relaxing sunset ride with John and Scout and 3 dogs. Too many dogs! They all had too much energy in too many different directions. No biggie for Buster. 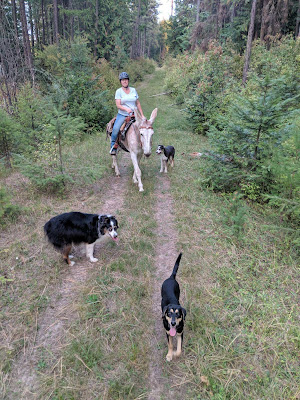 Sawyer has gotten out a bit too. We met some new riding buddies the other day and that was fun.

We even had a loose horse along for the ride and it was just fine. 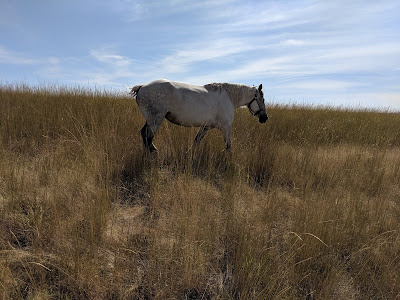 Liam has been getting Sawyer out and riding him briefly at home almost every evening lately too. 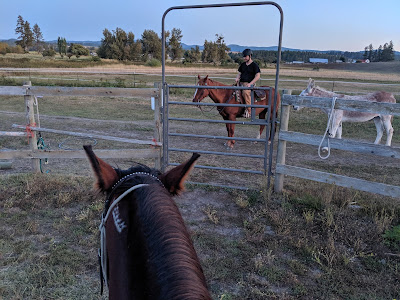 I rode Halla tonight. She was a very good girl. Not totally comfortable with everything, but she's so responsive compared to any of the boys. Sawyer never knew a lot of the finesse stuff, Scout is like a big distracted school bus (although he does try), and Buster is a donkey. He does what he thinks is a good idea, in his own time. And he's still learning, of course. Halla is a fat ballerina. Not really. She's a fat over-achiever though.

She didn't want to come out of the dojo. I think it's nice that now the round pen is a safe space to think rather than a place to run. 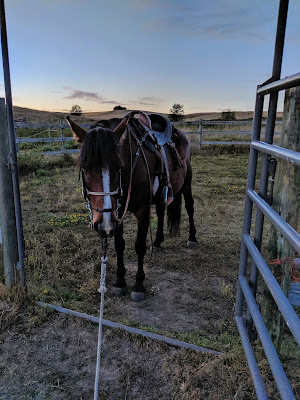 This would have been a cool silhouette if she hadn't turned her head just enough to make her neck look too short and thick. Well, she does also have those big ears. :) 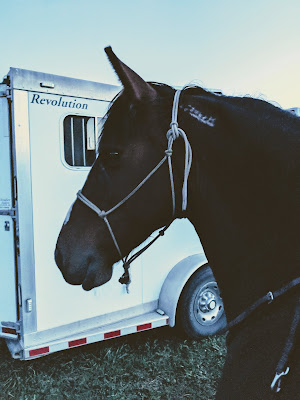 What a blast to be riding so much! Be super-careful on Halla. Everyone I know who rides green horses seems to have bandages on somewhere.

Oh, I know! She's already put me in the ER once and given me a mild concussion on a separate occasion. I don't stick in the saddle well enough...